Why Did You Wear That: Seeing Red 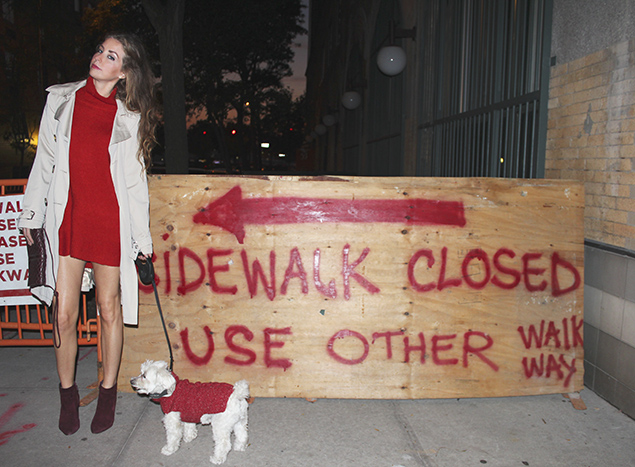 It can be tricky trying to decide what color to wear with red.  When I was younger, I had an incredibly strong aversion to wearing black with red.  To me, it came off as a little cheap.  I don’t feel as strongly about it now as I did when I was sixteen, but I still prefer other options over basic black when accessorizing with bold red.  Well then, what options is one left with when black is eliminated?  You could opt for luggage colored brown, or even a soft taupe.  Another great option is grey (also a fall trend).  In this instance, I had forgotten I even had these deep oxblood Pour La Victoire boots hidden beneath my bed (that’s how we store shoes here in New York).  As soon as I’d wiped away the dust bunnies, I recalled that I also had a vintage bag from my mother that was of the same shade.  Once a complete faux pas and something only worn by women donning their Sunday best for morning mass, I threw caution to the wind and got wild by matching my shoes to my bag.  Another option right on trend would be to wear a leopard boot or carry a leopard clutch (thous in this instance, I’d opt for one or the other).  It may seem a little bit “The Nanny” but I actually believe despite what men say, that leopard is sort of a new neutral.  Besides, did Fran not get her man?

Speaking of my man and matching, Smitty celebrated his eighth birthday and one of his doting aunts was sweet enough to bestow him with his own scarlet sweater.  She pays attention to fall trends too.  Pretty much Smitty and I became this fall’s Justin and Britney, Katy and Riff Raff.  Sure, my sweater is just about the same size as Smitty’s and technically it’s just an oversized jumper as opposed to an official frock, but it’s not the first, nor will it be the last, time wherein I wear something not as it’s intended. 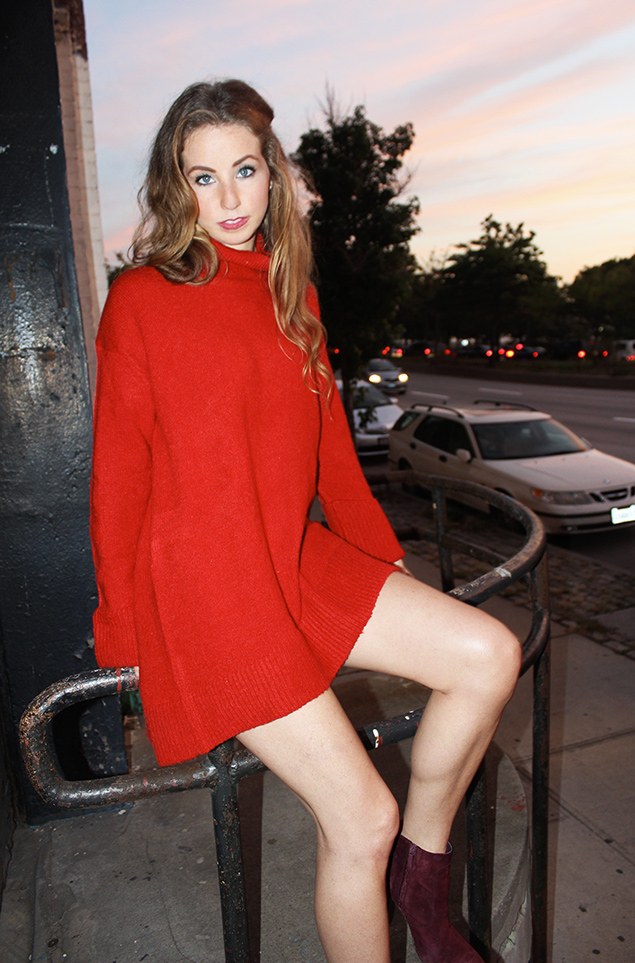 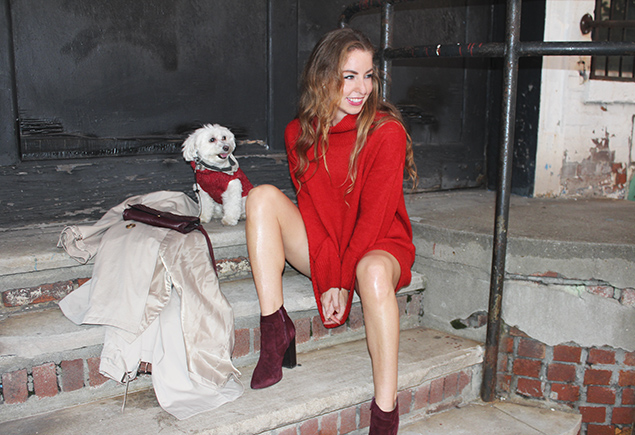 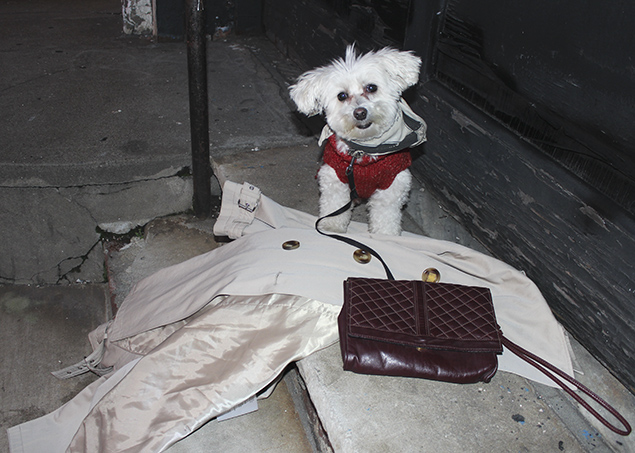 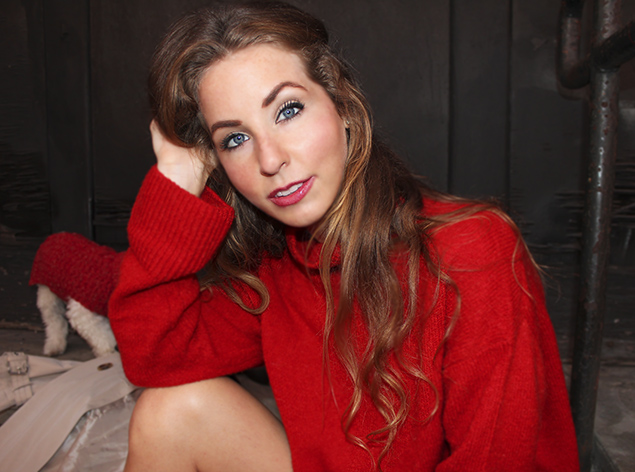 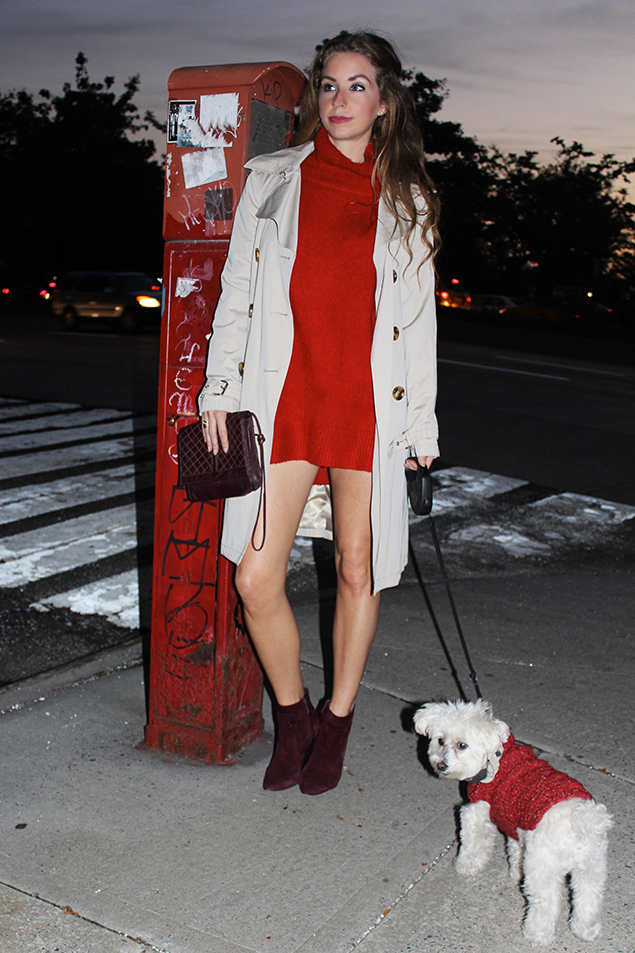 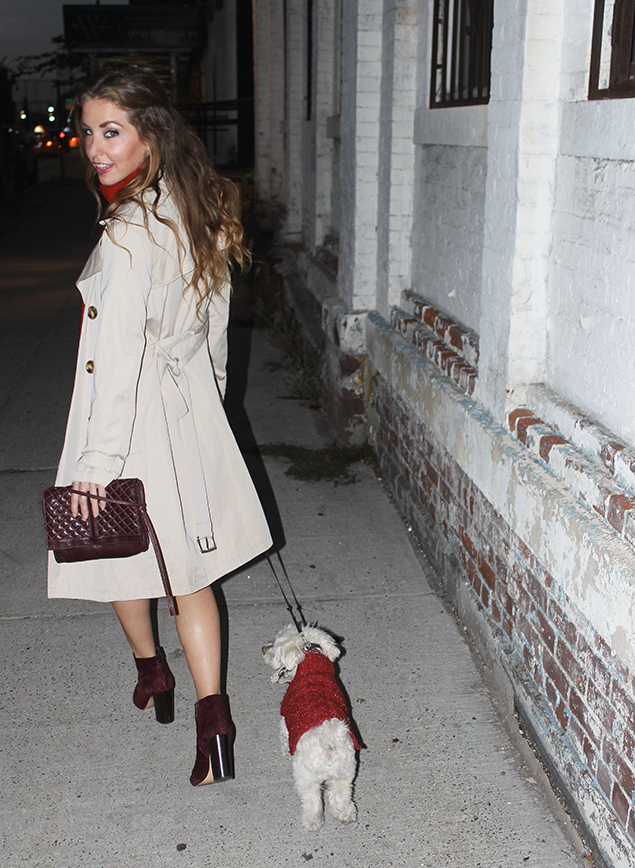 Photos by Michael Stiegler—-> have you check out his interview with Skinny Says Relax? 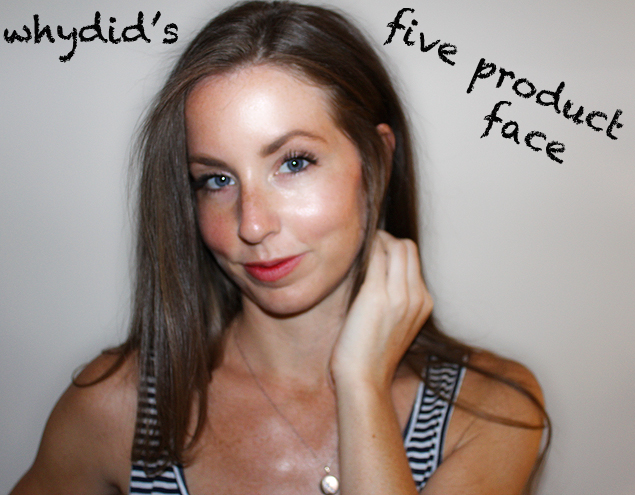 I mentioned before that less is more when it comes to cosmetics, but sadly the winter has a way of making you fall prey to caked on bronzer and and extra swipe of liner to make you feel like you look human.  And fall I did.  However, as the sun has started to shine again and my skin has begun to glow, I’m back to the bare bone basics.  I can not express to you enough how many (male) compliments I receive when I wear barely there makeup.  Groomed brows, berry stained lips and cheeks, and a healthy skin tone are the look that garners all the glances.  Five products and literally five minutes is all it takes to have you looking perfectly polished and oh so pretty. 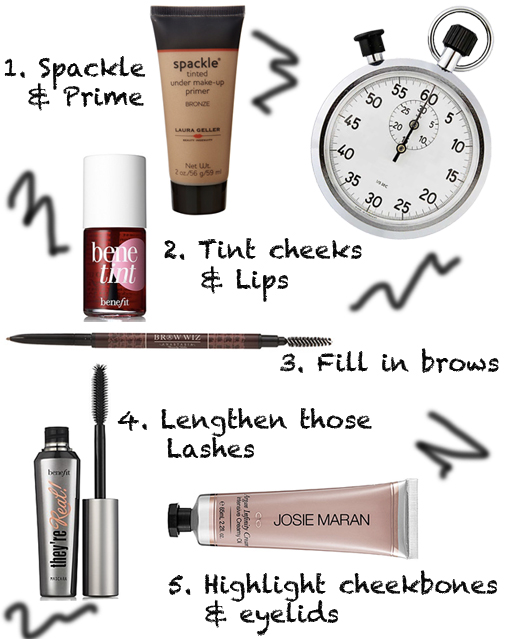 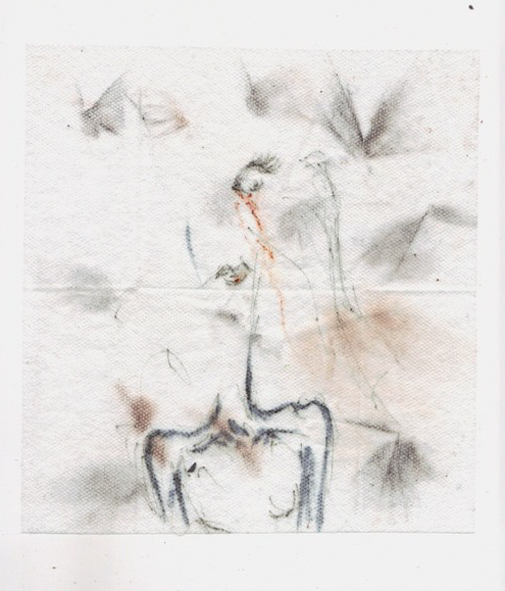 So, this probably isn’t going to win me any extra credit points with cosmetic companies round the globe, but that’s the chance you take when spreading the good word.  For years and years, basically since I was permitted to play in the makeup aisle at the drugstore, I’ve been fascinated with makeup.  I’ve gone through the phases of cake face, glitter shadow, frosted lips, and all the other makeup calamities that are a woman’s rite of passage.  We are taught and then it is pounded into our pretty little heads that makeup is the key to fixing any flaw and without it, we are just plain Janes not glamorous goddesses.  And while I do enjoy playing around and experimenting with different lotions and potions (that’s half the fun, afterall), it recently came to my attention that I’ve been wasting a lot of money and time fudging with my face.

On one particularly hilarious evening in, a friend saw a photograph in a frame on my (alphabetized) bookshelf from when I was living in LA and said, “Wow! You look like a real whore!  So much makeup!  And  so blonde!”  I wanted to be insulted, but he was right.  I looked like a different person, a Barbie.  It’s not that I looked bad, per se, but by doing “so much” to look good, I ended up looking just like everyone else.

When I met a girlfriend out one evening haven’t having had time to spruce myself up, she informed me that I’d never looked prettier.  I was confused at first and wondered how many cocktails in she was already, but I started toning down my look and received the same compliments about my fresh face.  And while I won’t reveal my actual age (today), most people’s guesses include me still being a co-ed.  Funny thing is you know how we wear makeup as pre-teens to look older?  Well, it works, doesn’t it?  So when we actually are of legal drinking age, we probably don’t want to look any older, right?

Here’s a little secret I’m going to let you in on: less is, in fact, more.  In my old(er) age, I’ve toned down the bright white highlights (aka, I haven’t colored my hair in over a  year), and given up all the extra beauty products.  My hairdresser leaving the US is probably the best thing that’s ever happened to my tresses.  I actually know what color my natural hair is and it’s never been healthier.  Turns out the shade I was given suits my skin tone (without heaps of self tanner and sun), which only brings out the blue eyes that are luckily and thankfully God given.  It’s like I’d been fighting against mother nature all these years and finally gave in.  My best guy friend is somewhere smirking to himself saying, “Told you so.”  Speaking of which: another bonus, guys who are actually of value (as in you may actually want to hub them up), prefer a woman with a natural face.  They don’t wanna worry about washing oompa loompa off their sheets or holding their breath in fear of what may wake next to them.

So, what’s the key to a clean polished fresh face?  Other than starting with a serious skincare routine (your dermis is the most crucial part of the look), here it is in four steps (five when I’m feeling fancy):

So, who’s hiding out under there? 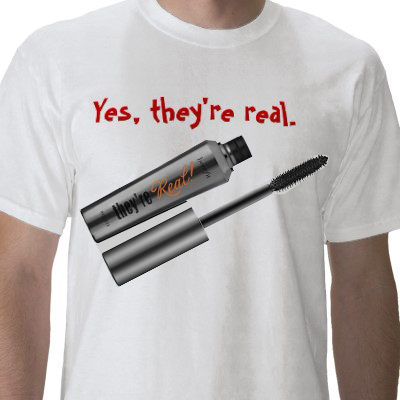 Now I remember why I don’t turn on the TV before I’ve done all my writing, editing, and all around important things.  Lifetime Movies.  How is one supposed to get anything done when 15 and Pregnant (starring a youthful Kirsten Dunst) is on?  It’s like a black hole.  You just get sucked in and then there’s no stopping it.  One twisted movie after the next.  Before you know it, it’s 5pm and you’re still in your jammies and they’re may be an entire bag of tortilla chips missing.  Well, as you know (or maybe you don’t… in which case you’re missing out), a good Lifetime Movie will get even the staunchest soul working those tear ducts.  So, you’re going to need some expensive mascara to cry off.  That’s where my latest beauty find comes in.

Remember when I tried out Maybelline Volum’ Express Falsies Flared Mascara?  Yeah, not so good.  Well, I may have stumbled upon the Holy Grail of mascaras… maybe.  I had heard a few people going on and on about  Benefit They’re Real Mascara.  Now, we all know how deep my love runs for Benefit Benetint… if I can expand on this love fest, game on.  Below, check out my trial of  Benefit They’re Real Mascara. 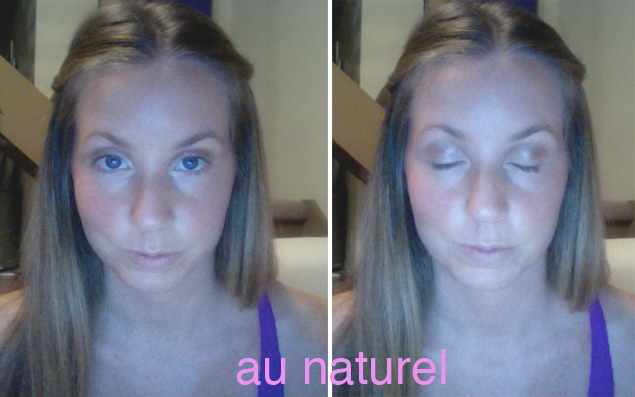 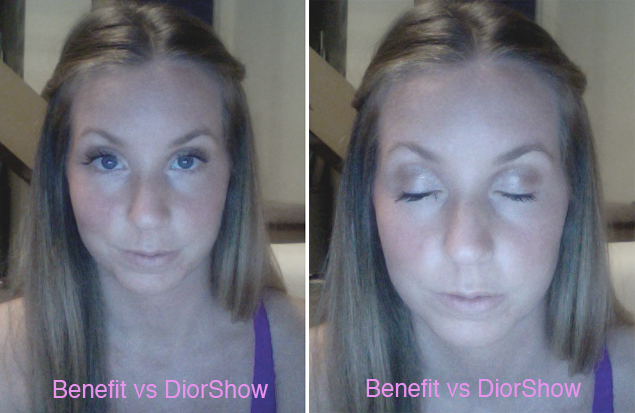 Now, when I tested out Benefit They’re Real Mascara the first time, I wasn’t sold.  The texture isn’t so good the first couple of applications.  I also didn’t realize it was making such a big difference until I tried it up against a fan favorite, Christian Dior Diorshow Extase (I’m wearing Benefit They’re Real on the left and Diorshow on the right).  Whoa!  This mascara is no joke.  You may not be able to tell in these photos, but the difference is substantial. 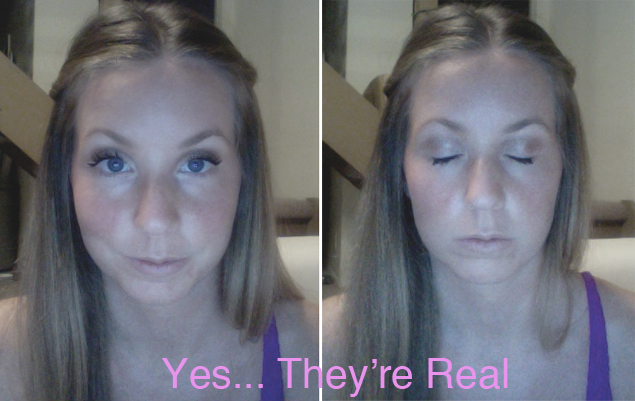 Final verdict?  Basically, this mascara is telling false eyelashes to suck it.  You will not need them once you get the hang of this high impact, super sexy mascara.

Oh… but we’re not done here.  Today’s a twofer.  Because this mascara is so dramtic, you’re going to need a good makeup remover to get it off.  Nope, not even a Lifetime Movie marathon or your average cleanser is going to get rid of this stuff.  Behold NARS Makeup Cleansing Oil.  This magic potion will not only banish your mascara, it will get rid of any and all traces of makeup.  I have very sensitive eyeballs, and this doesn’t hurt or irritate my peepers a bit.  It also won’t leave you shiny or greasy.  Might I add the crowning glory?  Looks great on your vanity.  I call that a win, win, win… and who doesn’t like to win?  Not me. 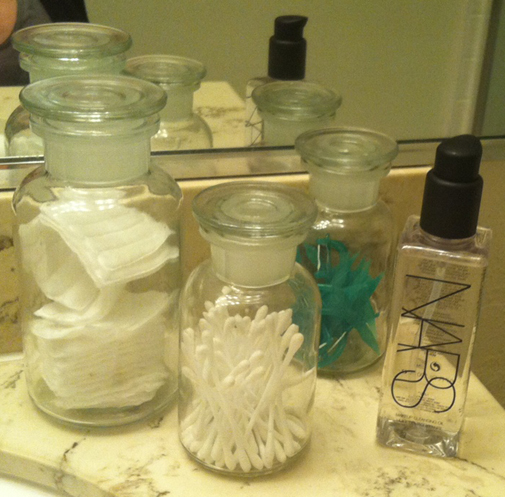 Now back to She Woke Up Pregnant. 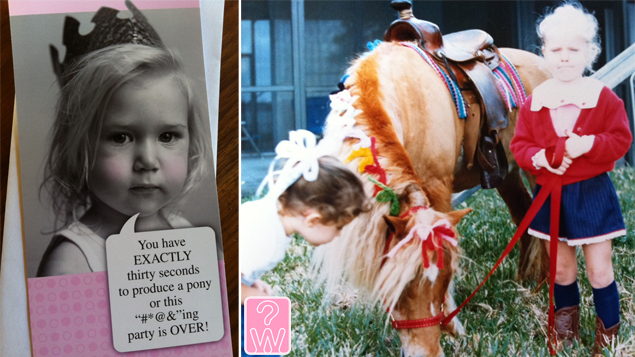 I was not kidding about that pony.  I feel that in honor of my birthday, I should suspend the usual snark fueled list in order to honor some things that make me giggle with glee.  So, here are ten of many in no particular order.

Happy birthday to me (and the rest of you Capriquarius kids).