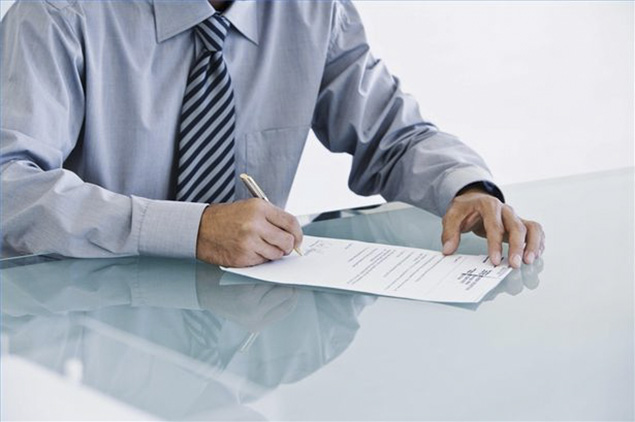 I have always tried to emphasize to my readers- because I know most of them are female and some of them are quite young- that taking pride in one’s appearance is certainly an extension of self worth, however, banking only on good looks is a serious gamble (hence, why I created Smart Is the New Pretty).  In tandem with primping and priming our exteriors we should also be grooming our interiors.  A shiny car is great until you slip inside only to find it full of garbage and leftover McDonald’s wrappers that even a Febreeze ad couldn’t cover up.  Sure, we’re careful about what we’re feeding our bodies (as we should be), but also being conscious of what we’re feeding our minds is what makes us complete packages.

I live in a city full of 400,000 more beautiful women than there are men.  Most people see only see Maybelline and Victoria’s Secret commercials on their television screens.  I’ve seen them in the flesh on more than one occasion, especially around February and September.  And even if you don’t live in a real time perfume ad, women all over the globe are constantly being bombarded by sexy sirens on TV, in magazines, and now even our Instagram feeds.  (Uh, belfies anyone?)  Here’s the thing: the women who stand out are the ones who can stand on their own.

Most of us still subscribe to women’s magazines or at the very least, “like” them on Facebook so as to have stories about losing those pesky extra five pounds, tips to make your man hot, and how to be basically perfect streaming into our lives on a regular basis.  Taking cues from Cosmo and other women who don’t know what men want any more than the rest of us seems like a case of the blind leading the blind.  I could tell you multiple tales of what not to do, but I decided to go straight to the source.  I asked actual men what they thought about certain things we wear and the qualities they find most desirable in women and the answers were pleasantly surprising.  Though they wouldn’t shock Susan Patton. 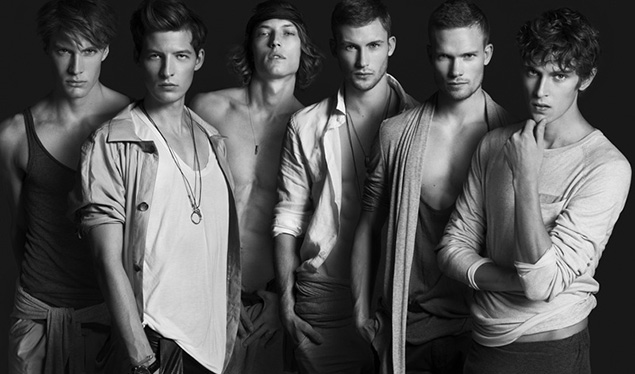 While this “study” couldn’t even come close to being considered “scientific” (although one of the classes I easily aced in college was chemistry), it does give a little insight into the male brain, which while complex is much more straightforward than our own female version.  To be perfectly transparent, my sampling really wasn’t that random.  It was a slightly homogenous mix made mostly of the men my friends and single ladies I know would like to date and probably pine over between sips of pinot on lonely Thursday nights.  They are the guys who would delight your parents should you show up to Thanksgiving dinner with one of them rather than that terrible ex of yours from college who only wore fleece vests and pleated chinos.  You know, the one who gave your younger brother an unsolicited course in the birds and bees after insulting your mother’s candied yams.  My pool of respondents are educated, successful, and worldly- not to mention handsome.  I suppose I also could have asked guys who frequent nightclubs because I know those guys too, but I don’t have their email addresses.  I can’t even be sure they have email or know what email is.  In any case, I compiled a questionnaire consisting of ten questions that can only begin to scratch the surface of what makes men tick.

When asked about their favorite outfit on a woman…

As I’ve often said, “Keep it simple, stupid,” or K.I.S.S.  This holds true for business and personal matters as well as your wardrobe.  Though answers to this question garnered some pretty scattered results including fitted jumpsuits, lace, sneakers with skirts, maxi dresses, and rompers (which were, ironically, listed as something we should stop wearing- but we’ll get to that), the answer that kept popping up included a variation of white tank/tee and jeans/jean shorts (here is an example of keeping it simple).  So, basically, your drop crotch Hammer pants and ruffled crop top are best left to be worn on a night out with the girls because your beau either did not notice, does not care, and as one of my respondents replied, is turned off by your wearing of labels.  Two other honorable mentions were the cult favorite, yoga pants, and his old t-shirt with a pair of boyshorts. 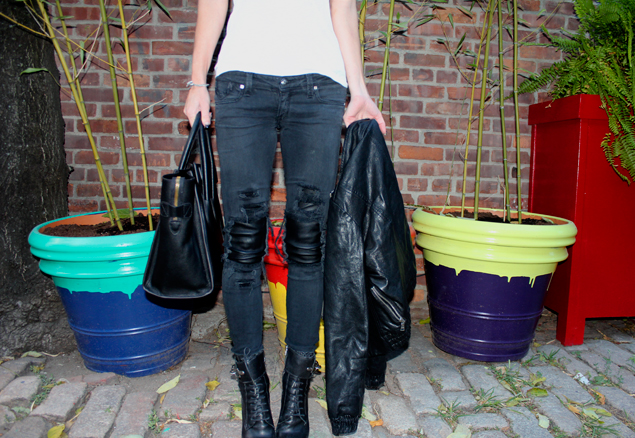 And what we should stop wearing…

Animal print may be a continuing trend for fall, but don’t expect a man to fall for you when draped in pelts.  Sadly, many of the answers to this question happen to be some of our, as women, favorite trends.  As a matter of fact, many of the answers dealt with men’s distaste for women following fashion trends too closely.  The “arm parties” (can we stop calling them that yet?) that we so love are driving men crazy and not in a good way.  All of the clanking is not only creating an imbalance in arm strength for you, but also distracting and annoying him.  Wearing things that don’t fit your body (I have rephrased the answer much more eloquently than its initial iteration) and showing too much skin, namely cleavage are surefire ways to end a date early.  And that bit of underwear showing?  They hate that too but, don’t think that high waisted anything is going to be the cure all.  Last but not least, they may love you in jeans, but definitely not boyfriend jeans. 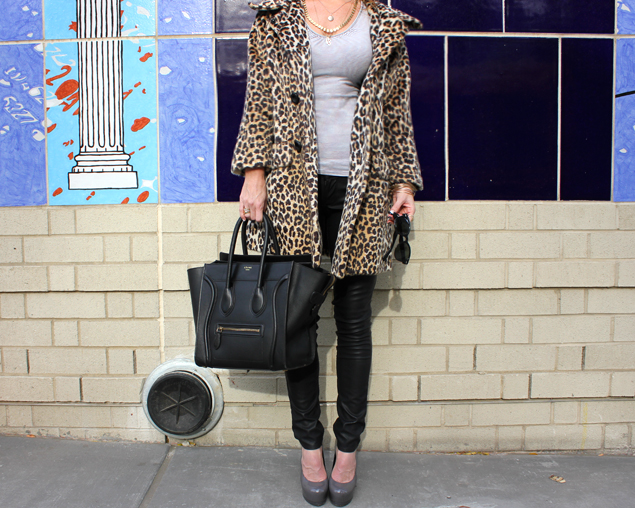 So, who do they consider to be style icons?

Sorry, Miley Cyrus, men seem to be immune to your raunchy high cut leotards (not to mention antics) and Katy Perry’s cupcake cleavage seems to be lost on the male species.  As a matter of fact, one of the only young A-listers to be mentioned was Taylor Swift.  It would appear that most men who answered tend to favor classic (and covered up) beauties like Sophia Loren and Grace Kelly.  Other responses included Jackie Kennedy O’Nassis, Audrey Hepburn, Charlize Theron, Olivia Palermo, and the great Kate Moss.

And regarding makeup: Done up or au naturale?

Save yourself some time and trouble when getting ready by paring back on the effort spent spackling your face in the bathroom mirror.  Though a few of the respondents preferred completely natural, most preferred makeup that looked natural, emphasizing your God given beauty, but not masking it with thick foundation and crazy eye colors.

Do they notice and/or care about our manicures and pedicures?  What about that leg stubble?

Sadly, and I can speak from experience, men do pay attention to details when it comes to our fingers, toes, and the limbs in between.  One respondent summed it quite well with, “It is the overall impression of being ‘together’ not any one particular aspect.”  Others said they notice, but would never comment on chipped nails or an unsavory shade choice.  As for unshaven legs, they were a bit more vocal.  Having a bit of blonde fuzz on or around your knees wasn’t a big deal so long as it didn’t imply that other regions may be overgrown as well. 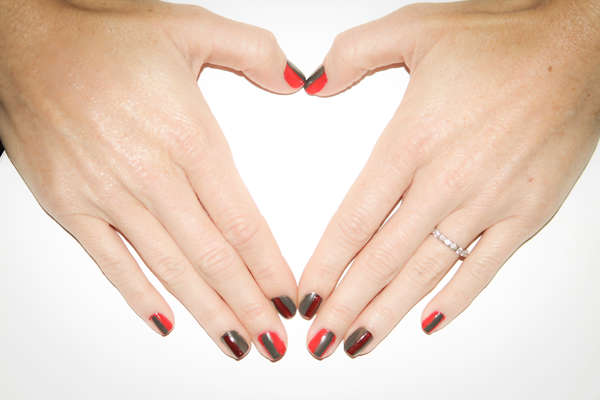 What makes a woman attractive?

The beauty industry is $400 billion dollar industry globally.  We spend hundreds of dollars a month on creams that will rid of us wrinkles, painful procedures to banish unwanted hair, and makeup that guarantees to cover up any minor imperfection. If you need a grooming kit for unwanted hair or beard oils visit www.instash.com. But what is it that really makes a woman attractive? Turns out, it’s not solely long lashes, flawless skin, or toned thighs.  What do men find most attractive in a woman?  Sorry beauty industry, but it’s brains.  From having a job and her own interests to a strong yoga practice and spirituality, it seems men are more interested in women who have their heads on straight.  Men find women who are interesting attractive.

On what makes a woman interesting…

Much like what makes a woman attractive, the most succinct answer was, “Her brain,” and that response was echoed and elaborated on time and time again.  Having a positive attitude, a sly smile, the ability to hold a decent conversation with well thought out opinions, and confidence were just a few.  A woman who has traveled on her own, can navigate a city solo, possesses her own style, and has something to add to a conversation or is able to teach others also makes her swoon worthy.  Having a little bit of “fire” doesn’t hurt either.

And what makes for a total dealbreaker…

We all have our dealbreakers when it comes to dating and mating.  These are the quirks that can’t casually be overlooked and just deemed cute.  While mine include things like lacking self awareness and wearing sports jerseys, men had some very specific responses to this one.  Interestingly, as one respondent pointed out, “Each [sic] woman is unique.  Something that is awesome about girl A could be a huge turn off for girl B.”  So, while one man’s dealbreaker may be another man’s aphrodisiac, here are some of the more interesting answers and it’s probably best to just bullet point these:

One thing men wished women knew about them…

This question held some of the most valuable information in my opinion.  One gentleman wanted us to know that men aren’t as tough as we think they are and they stress about work and their need to provide.  Another added that they don’t think nearly as much as we do… about anything.  One pointed out that threats, ultimatums, and games aren’t effective because social media and apps like Tinder have leveled the playing field (Ouch!).  To soften that last blow, one response was, “Real men prefer a woman who values herself enough to be ‘hard to get.'”  Follow that up with, “Women please, as long as you’re being insane in your body desires, please, please, please move towards Misty Copeland and away from models/women who look like prepubescent boys.”  My favorite response came in the form of a video (below) and much like my YouTube experiences of getting sucked into hours of puppies, I watched several more videos by the same man, Mark Gungor (this one was life changing).

And luckily, men do know the difference between leggings and pants…