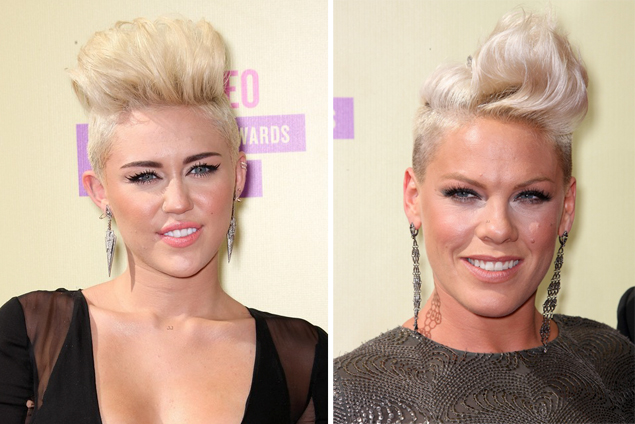 Alright, let’s not beat around the bush.  I do realize the MTV Video Music Awards took place last Thursday, which coincidentally coincided with Fashion’s Night Out.  This left us all with the burden of choosing between one three ring circus and another.  I, myself, went ahead and took on Fashion’s Night Out in New York by visiting with Lauren Kaminsky and David Lerner at Beauty & Essex.  This, of course, means that I missed out on all the tomfoolery of VMA’s past.  But alas, I took a little bit of time perusing the red carpet photos and viewing some of the noteworthy performances via YouTube.  And while, there was the usual ridiculous attire of some, others –ahem, Rihanna– redeemed themselves.

And then I realized something.  We’ve all been wondering what exactly Miley was thinking when she lobbed off her locks a couple of weeks ago (or at least her bun and I have).  Well, I think we may have unearthed her inspiration.  Perhaps young Miley was channeling the queen of girls kicking ass, Pink and her platinum blonde bouffant.  The resemblance is kind of uncanny and it leaves me wondering what Pink thinks about her mini me.  More importantly, what do you think?

Why I Can’t Sit Through the VMA’s 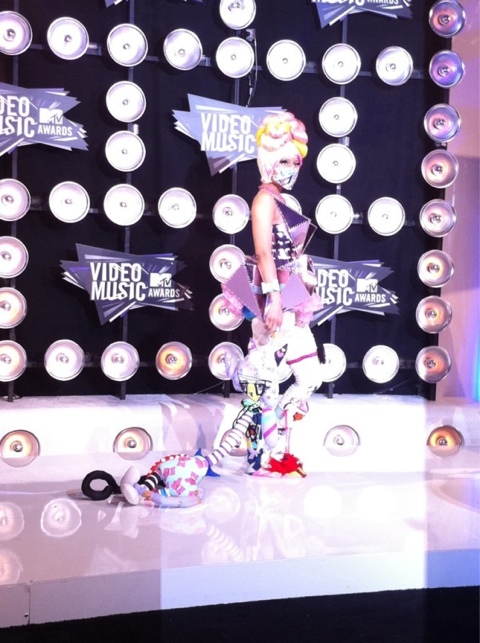 Oh sweet heaven above. Perhaps I’m just getting old, but I tuned into the MTV VMA pre-show because you know I love to blog about the oh so crazy fashion on the red carpet. However, after witnessing Justin Bieber arrive with a snake named “Johnson” followed by Nicki Minaj in another one of Lady Gaga’s rejected costumes, I couldn’t take much more. Then Katy Perry showed up with pink hair and Asian garb- complete with parasol- and I’d had enough. I needed to make a cocktail if I was going to attempt to sit through this shit storm. (Irene who?)

When I returned with a Bloody Mary, there was a very strange man performing “You And I.” Was I drunk on vodka fumes alone? Oh, it’s just Gaga.

You know who’s not drunk? Beyonce. 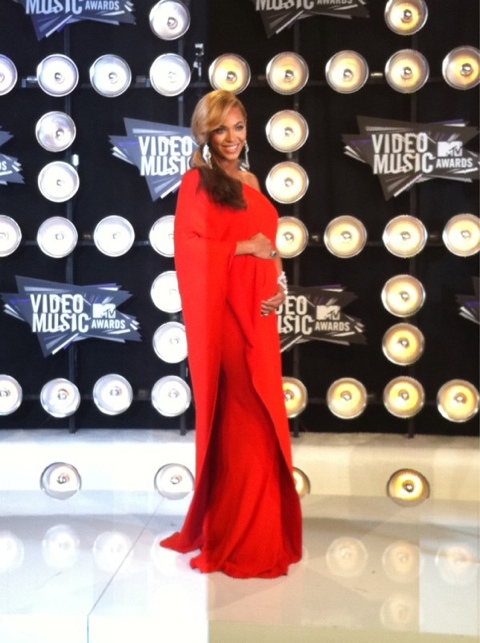 Now I’m gonna go finish my cocktail and if I have it in me will continue with red carpet commentary.

I mean, I mentioned it before, but it apparently needs to be spelled out. 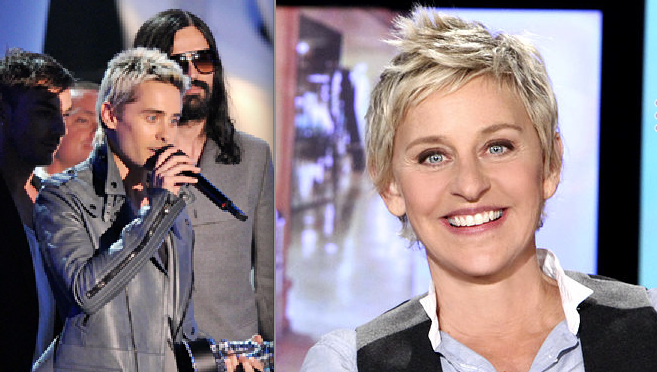 Perhaps, Jared is trying to capitalize off of Ellen’s success, but I’m sorry, bud, Portia is taken! I mean, quite honestly, I’m really, really confused here? Like, what does this mean??? Who’s playing for what team? Ugh. Someone help me out.

VMA(F)- Very Much A Failure 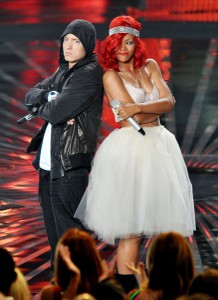 Um, so first and foremost, I’m going to pose the question: When is the last time MTV actually even played a music video? Do people still make videos? Why? Seems like a whole lot of money to dump into something that has zero return rate, no? Kinda like a first wife. 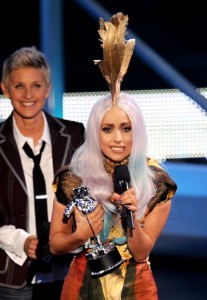 Anyway, I’m not going to even bother with any type of fashion recap, cause quite honestly, it was all wretched and I don’t want to suffer through it for a second time. It’s bad enough that MTV will now continuously replay the VMA’s for a solid two an a half weeks. So, in case you missed it (and you miss it for the next 465 times they play it), here’s all you need to know: 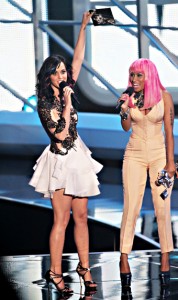 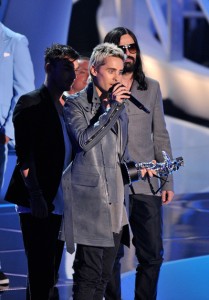 And there you have it folks. Nothing to see here. Keep the line moving.

It seems that this year people actually tuned into the MTV VMA’s.  Perhaps it was the tribute to Michael Jackson, or maybe that it was back in good old NYC, either way the show did not disappoint.  Twitter was abuzz last night with updates on all the drama and performances.

Clearly, the theme for last night was a lot of gratuitous ass.  I would have come up with an “A” word for vagina, but could not think of one.  The bar was set high when Katy Perry performed wearing WHITE shiny leggings and a serious case of cameltoe. 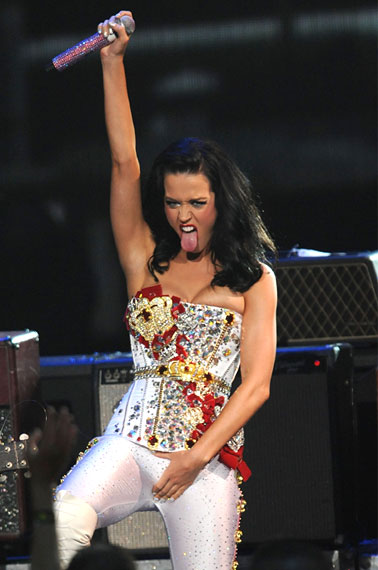 And just in case you didn’t notice her lady parts, she finished off her performance with a “crotch grab.”  Classy. Love Katy, but no woman should attempt the white spandex pants. Ever. 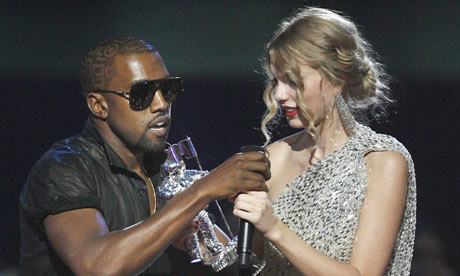 Speaking of ass, Kanye West sure acted like one when he ruined Taylor Swift’s moment to shine.  Really, Kanye? Get a life. Picking on a cute girl like Taylor is just LAME. 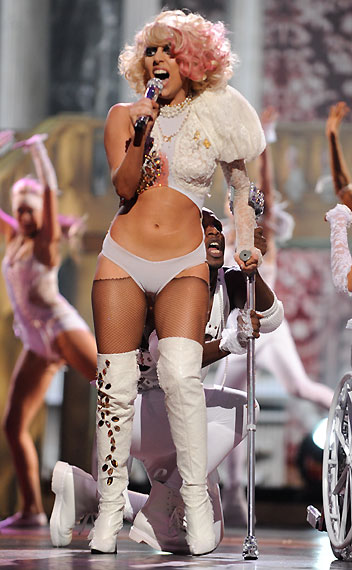 Oh, Lady Gaga. I wouldn’t expect anything less from her.  She’s notorious for her lack of clothing and her affinity for all things leotard.  While she normally has security who blocks paparazzi from taking photos of her derriere, we got a full view last night as she swung covered in “blood” from the ceiling.  If Lady Gaga could buy stock in “inappropriateness”, she would. 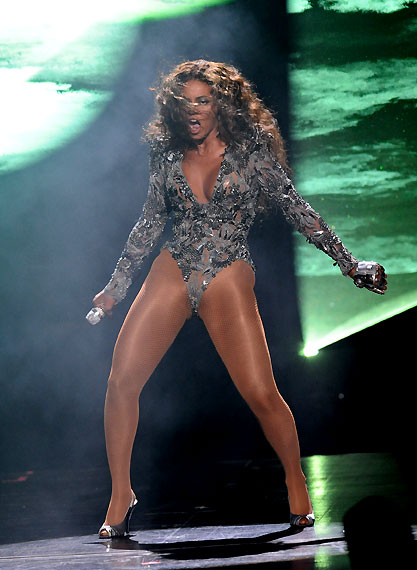 It’s clear to all of us why Jay-Z went ahead and put a ring on that.  I have to give the girl props for sporting this little number, however, that’s a lot of crotch.  A couple of things: 1) I want the number to her waxer.  It’s safe to bet that Beyonce took a trip to Brazil before her performance, 2) the trick to Beyonce’s svelte thighs? Double (or even triple) layers of tights.  A shiny shaping pair layered beneath nude fishnets will erase and trace of cellulite or extra lbs. 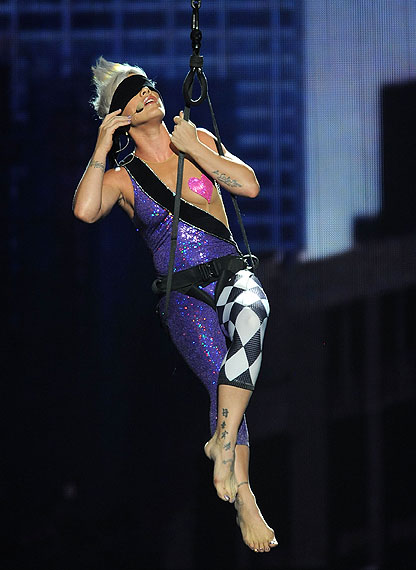 We all know pink is a bad ass, but attempting this little stunt in a unitard with a huge contraption in her crotch giving her the world’s largest cameltoe… Ouch.

I wanted to also include a photo of Russell Brand in that ridiculous suit of his because he is a total ass and we also saw too much of his crotch as well. I’m confused as to why MTV signed him on for a second year of hosting. Do people actually like him? And for the record, women aren’t the only ones who need to be conscious of their thighs in skinny pants. Men with thick thighs can not, I repeat, can not pull off skinny pants. 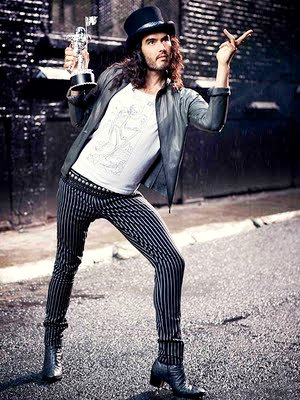 But alas, there was a happy ending after all. 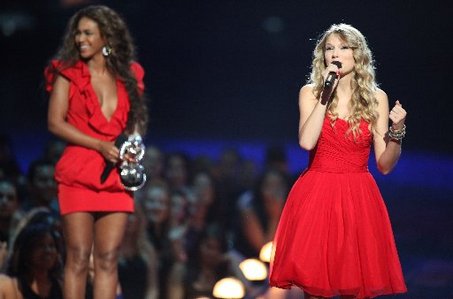 Beyonce saved some ass (ahem, Kanye) after she graciously gave up her time for an acceptance speech for Video of the Year in order to allow Taylor Swift to complete her acceptance speech that had been cut short due to douchebaggery.

I propose that next year they go ahead and change the name.