Why Don’t You Eat Me: I Fon-due 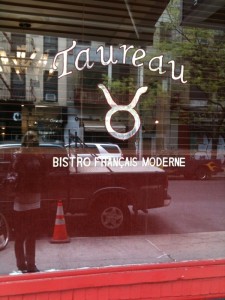 Mix cheese and chocolate and I’m sold.  Toss them into a fondue pot and I’m double sold. Who can resist dipping multiple scrumptious items into even more scrumptious melted sauces? Not me. So, when Taureau opened up on 7th street between 1st and A (one of my favorite block as far as food goes) I couldn’t wait to try it out!

After feasting on BBQ and Mexican all weekend in my hometown of Memphis, I decided to head on over. We had reservations for 7:30 and got there at 7 after stopping by to pick up a bottle of wine first (they’re BYOB!). No one else was in the restaurant, but then again it was a Monday at 7 in the East Village. 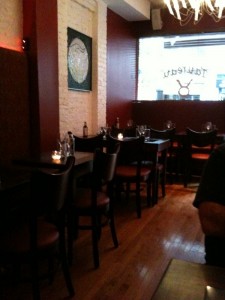 Obviously I’d already scoped out the menu and knew exactly what I wanted. I ordered a cheese fondue called Devil’s Wiff. The very helpful waitress explained that Chef Didier came up with this name himself (even though Wiff isn’t necessarily a word and doesn’t exactly have a meaning). Well, when you come up with something that tasty, you can call it  whatever you want. The Devil’s Wiff is a blend of pepper jack cheese and wine. I picked this one for the “spice” factor. The fondue comes standard with a side of greens and croutons for dipping and they leave the rest up to you. I chose cauliflower, red apple, hot chorizo, and marshmallow cut slab bacon.  Oh yes, I did indeed just say marshmallow cut slab bacon. Phenomenal. 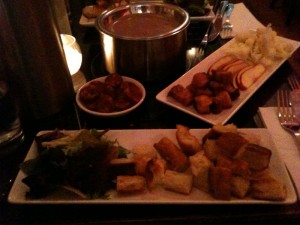 They also have meat fondue that you cook yourself in different choices of oil, but I decided to save that for another time and leave room for their milk chocolate fondue called the petite au lait (for 1-2 people). It’s served with fresh fruits (bananas, strawberries, and pineapples) as well as dried figs, dried apricots, and baby marshmallows. This is the kind of dessert where all conversation ceases until every last bit is consumed. It was so good that we may or may not have started dipping our spoons in for the remainder of chocolate once our fruit was depleted. 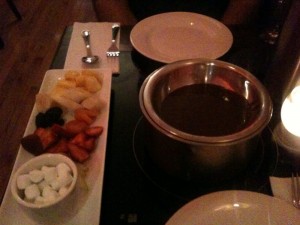 During our meal, Chef Didier walked in with his motorcycle jacket and helmet in hand and stopped to greet us. I told him how much I enjoyed dinner and he told me that it’s all about simple, good food. Exactly what I’d been looking for and exactly what I got!

I give Taureau 4 out of 5 mouths for being fun, different, yet straight forward.