Why Did You Wear That: The WORST Trends of 2008

With the end of 2008 just around the corner, it is time to reflect on the past year and look forward to the year ahead. With this comes time to make New Year’s resolutions to better ourselves and hopefully to resolve from wearing ugly clothing.

Clearly, I have quite a few that I would like to never see again.. ahem.. Leggings as Pants… But, I have asked some of my savvy and stylish girlfriends which trends of 2008 they  hated the most:

“Ok, so it was the high-waisted jeans (particularly on the wrong people, ie Mischa Barton), the baggy parachute pants with the ridiculously saggy crotch, and the peep-toe ankle boots (eww).”

“Open toe booties. What the hell is that anyway? Either its cold or not. Reminds me of something a hooker would invent, to show more skin.

Clip-in extensions.
If done properly, you’ll look fierce. If not, you’ll look frightening. Perhaps one should have to pass some sort of proficiency test in order to buy a set…

Wedges in winter.
I just don’t trust it. Something about the wedge style shoe screams St. Tropez, not st marks place. Even in boot form, I’m a firm non-believer in the winter wedge.

Leopard print.
When will this fabric ever die? I do believe leopards themselves are on the endangered species list, purely because their likeness is being exploited at forever 21’s everywhere. I don’t think they’re actually endangered; they’re still here, just hiding out until this print is done for.” 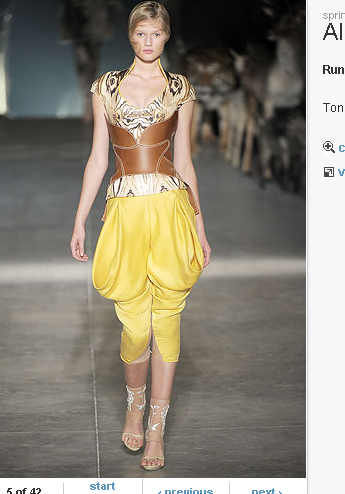 Make me want to kill myself.”
Val:
“The boyfriend jean! And they are blowing up even bigger for 2009! Who wants to walk around looking like they have a big dump in their pants? Not me!”
Thanks ladies, you really hit the nail on the head with some of those. A few more that I never want to see again:

Hippie Headbands- I really don’t know who decided this was a good idea or that it was even slightly flattering, but it really needs to end. The plain old shoelace ones were bad enough, but now it seems that young ladies are trying to get crafty with them (a la Whitney Port). I know the 70’s seemed like a loving and peaceful time, but hippie headbands get no love from me.

Kanye West Glasses- They only work on Kanye West because he is, in fact, Kanye West. Everyone else just looks silly. Now that they sell them at every street bodega, you should realize this is a trend you don’t want any part of.

Fedoras- and just like you are not Kanye West, you are also not Justin Timberlake, nor are you Al Capone. When I see fedoras (on guys and girls) I just think, “wow, they are trying way too hard.”

And with that, I wish you a safe and happy New Year!
xx,
WhyDid