Why Did You Wear That: Somethin’ for the fellas.

There is basically only one thing that enrages me more than leggings worn as pants.  TRUE RELIGION JEANS on a man. Here is a story regarding these heinous pants:

Once upon a time, a young Princess met a very handsome, charming, smart, funny man. He was basically everything she had ever hoped for in her Prince. However, things were almost over before they even began.

She was so excited for her first “real date” with this lad. She was sure this was it. But lo and behold, he showed up wearing…. dun dun dunnnn… True Religion Jeans! The princess was devastated. Now what? Her Prince would NEVER wear True Religions!!

Luckily, her Prince Charming was smart enough to realize when it comes to fashion, the Princess knows best. Therefore, he allowed her into his closet and she banished all of his True Religion jeans from the kingdom. Then they lived happily ever after.

**This is a true story. Names have been changed (okay, omitted) to protect those involved.

See, I’m not the only one. Do yourself a favor, guys. Just get rid of your True Religions now. You don’t want to scare away your dates. I know, they were $300. Consider this your punishment for buying them in the first place. Look on the bright side, at least you’ll get a second date. 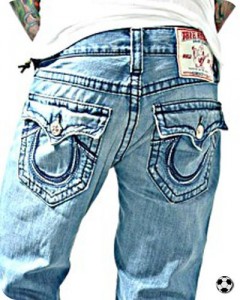