Would You Wednesday: Thigh’s the Limit 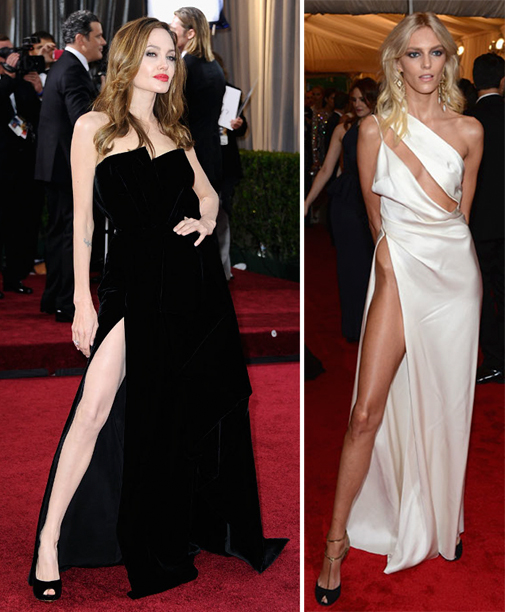 First it was side boob, now it’s the extreme leg slit.  Seems like ladies are looking for any place they can to show off a little bit of skin.  The first to really give it a go was Angelina Jolie at the Oscars.  Her leg caused such a stir that it got its own Twitter account.  She was not to be outdone by the beautiful Anja Rubik at this year’s Met Gala.  Her slit was dangerously high, though I doubt anyone’s complaining.  So, are legs the new side boob which were, of course, the new cleavage? 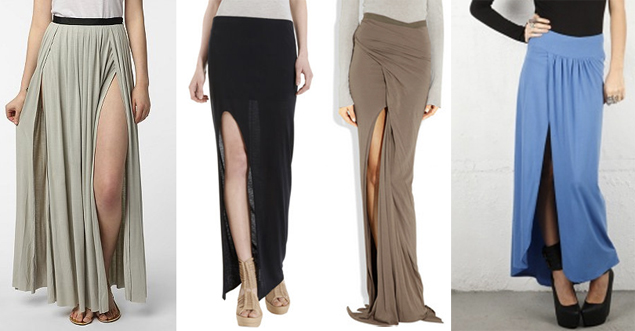 So would you wear a slit way up there to your derriere?

Would You Wednesday: I See Through You 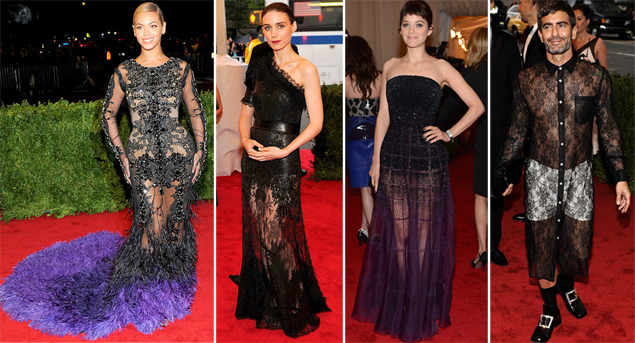 This past Monday, the Super Bowl of fashion, the Met Gala happened in New York City.  As any good fashionista knows, you better arrive dressed to impress or risk being on every news media outlet’s worst dressed list.  And deck themselves out is precisely what this year’s A-list did.  While there are always a few stand out trends (like Wintour in white and a smattering of sunshine-y yellow), the one trend that seemed to catch everyone’s eye… and breath… was the see through gowns showing off some skin and some seriously gorgeous gams.

To some, this excess of skin may be offensive, but I personally have no problem with it… so long as it’s done with taste rather than haste.  I grew up in a kind of “naked house” (it was mostly me and mom… so there was no need for modesty).  I’d wear a tissue if I could get away with it and as a matter of fact, I have a dress that I reference as the “tissue dress.”  I get it though, one can take a little bit of chic cheekiness and turn it into just a lot of cheek.  And while I’m not put off by the female body, some people just don’t appreciate some good side boob and are abhorred by the mere trace of a nipple.

So would you don one of these daring dresses?

Would You Wednesday: Whose Side Are You On?

The side boob isn’t really anything new, but in the past couple of years, it’s been making a pretty strong campaign to be the new sexy skin .  Could it be?  Side boob the new cleavage?  Somehow the side boob is sexy without being slutty.  It’s suggestive without being too saucy.  Celebrities have been spotted all over town letting their mammaries sneak out the side to catch some fresh air.  I’m talking about good girls like Ann Hathaway and Lauren Conrad.  I mean, it’s not like I’m using Lindsay Lohan as my moral compass.  Even magazines have taken notice of this sneaky sideways trend and April’s covers are smattered with side boob.

This past weekend, I slipped into a new dress that was not exactly brassiere friendly.  So, I snapped that baby right off and wore the dress sans support.  When I gave myself a gander in the mirror, I wondered, “Is there such a thing as too much side boob?”  Well, what could I do but take a quick poll on Twitter?:

Question: is there such a thing as too much side boob?

said side boob in question: twitter.com/WhyDid_dotcom/…

Uh, Dad, if you’re reading… I absolutely wore a sweater over this.  When I arrived at my destination, there were a few more young children than I had anticipated so I did keep my arms mostly glued to my sides so as to avoid any awkward nursing attempts.  What did everyone else think of my free flowing friends?  The general consensus was positive.  Both males and females commented on my peek-a-boo sideshow.  Granted, I did get a couple of not so friendly glances from a few women, but I guess that’s to be expected.  It seems that the side boob is also less offensive than the over the top push up cleavage of days yore.

So, now I ask you, my lovely WhyDid readers:  Is “side boob” the new cleavage?  And is there such a thing as too much?

Now, pick a side.