In the last decade, I have lived in ten apartments and homes, moving a grand total of eleven times.  Until recently, I hadn’t lived in a place for longer than a year.  Usually, not even making it a full year before some sort of dramatic uprooting and domestic chaos ensued.  Whether it be a breakup, the sale of a condo I was renting, or a rent increase enough to make Drake call his accountant, there was always a reason to hop on StreetEasy and search for a new home.  While the majority of my moves remained local, there was that one time I moved to California…

Most of my friends spent this summer vacationing and tanning in tropical locations, I spent my summer scouring the internet for an apartment.   And while I’m fairly certain it was equally hot and humid here, it was much less sexy and did not require a passport.  I can’t quite be certain the exact moment the seed was planted (and more than one person would like to take credit), but after I’d made my mind up that I’d be vacating my current apartment– a place I’d lived for the last four years, a record by any account– the unthinkable happened. 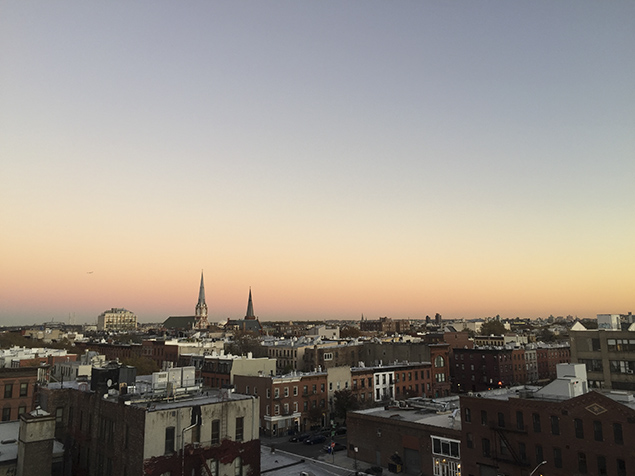 Once known to be a bit of a neighborhood snob, I’ve been quoted as saying, “I don’t do the east side,” no one would have ever thought that I’d consider moving above 23rd street, let alone another borough.  And I don’t think my highschool best friend will soon let me forget that I never once visited him in the seven years he lived in Windsor Terrace.  But alas, having ventured to look at apartments in Fort Greene with a good girlfriend, she’d swung me to the other side by the end of the afternoon.  Seeing that I could get a lot more for my money (a bedroom!!!) and a complete change of scenery was reason enough to consider swapping subway lines.  Either that or the copious amounts of rosé generously served to us at Madiba completed my conversion.

But Brooklyn was like a foreign country to me.  I had always lived in Manhattan and truth be told, I still get mixed up when exiting the train in the city.  And anything below Houston?  Forget about it.  I don’t know up from down and I’m the least desirable candidate for co-pilot, unless you’re willing to credit me for my skills as a DJ and ability to make a game out of anything to pass the time on a stretch of rural highway.  In any case, deciding to move to Brooklyn presented me with the process of exploring all of the neighborhoods to try and figure out which one felt most like me.  But who am I?

My entire New York life, I have been associated with the west side and was lumped into the West Village stereotype, which varies dependent upon who you ask.  Billy Joel never wrote a song to explain it.  I really didn’t know where I belonged.  I just knew that it was time to move on.  I was sick of the frat parties happening bi weekly down the hall, if you asked me where I wanted to eat I couldn’t name a place within a five block radius, there was a general feeling of unease and restlessness, and I just knew I no longer felt at home.

I spent my days wandering Brooklyn and even rented a bike one day with a friend who lived in Crown Heights so she could show me how the neighborhoods connected and I could get a feel for each of them, something that a man I was dating at the time could hardly believe as I’d stared at him open mouthed on our first date when he informed me he’d ridden his bike… from Brooklyn.

When I make decisions, which often takes me a while, I become fixated on them.  I like to pick something and put on the blinders.  Some would call that steadfastness others insouciance.  Just like I don’t like to say goodbye at airports or linger too long over multiple choice answers.  For someone as emotional as I, I can also be quite binary.  Once I have finally come to a verdict, that’s all there is, no turning back.  Unfortunately, this time wasn’t quite as cut and dry as most situations.  There were several times where the doubts began to creep in and the cold sweats consumed my sleep.  I wondered if my friends would ever come and see me.  Would I be cool enough to hang with the makeup free beauties and man bun babes?  Did I have to stop being so “city”?  What the hell is the G train?  Do I need another tattoo?  And why is everyone looking at my tiny hoodie wearing dog like a freak?  Almost up until the day I signed my lease, I was still scoping out apartments in NoLita and SoHo, wondering if it was too late to back out.  Did I really want to cross the East River to a land of unknowns?  I then pondered, why didn’t I just keep going east until I landed in Paris? 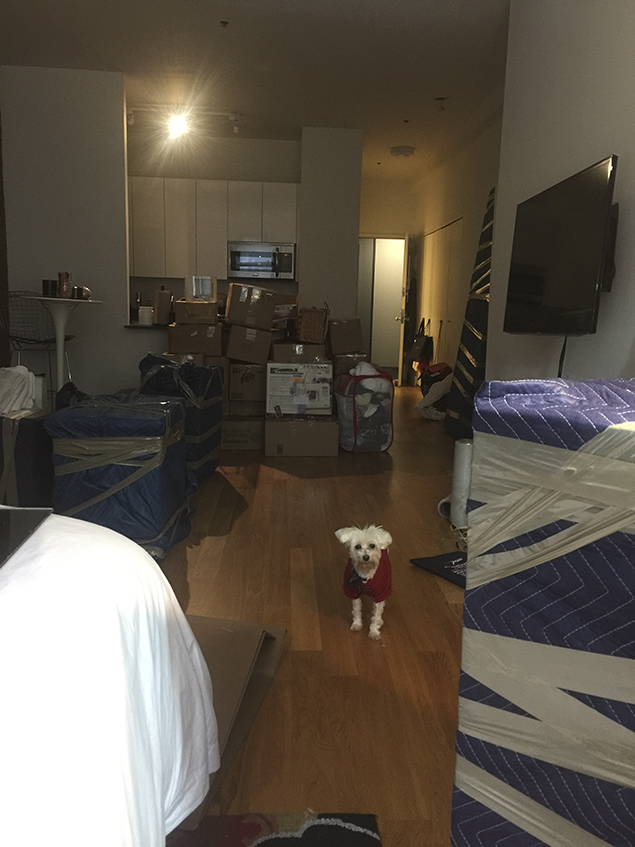 Then came moving day.  My landlord had already allowed me begrudgingly to extend my lease by a couple of months.  My boxes were packed.  My keys in hand.  There came the movers Auckland.  I watched them carry out boxes of books, piles of pillows, container after container of stuff.  And I wasn’t sad at all until I sat in my windowsill after the last box had been moved.  I was alone in this big rectangle of a room.  It looked so much smaller.  And I felt a bit nostalgic for all that had happened there.  This was my first apartment back in New York after a fairly dark period in my life.  I remember when I moved in, I thought that I was going to write my first book there.  My building manager assured me I’d meet my soulmate.  My friends were certain this is where Kirsten would get her groove back.  But none of those things happened.  And when I thought about what I was holding onto, I realized it was nothing that I needed.

Just like when we become attached to a perception of ourselves, we can become quite attached to physical things as well.  I never thought I had that much stuff.  I’d waited to pack completely until a few days before.  It wouldn’t take me that long.  Suddenly, what had fit comfortably in four closets, looked like an amassing of a hoarder of forty years.  I found a presidential Barbie doll from 2012 and a book by Trump given to me as a gift when I’d first started in real estate, a garage remote from our house in California, and a faux Christmas tree my mom had sent me several years ago.  How do we collect so much stuff?  At that moment, I wished I had taken my friends up on their offers to help, but my dad reminded me, “You don’t have any friends when you’re moving.”  There was a moment towards the end while packing my dishes that I just considered laying down on the tiled kitchen floor and giving up.  But that’s not my style.  I may come across as delicate at times, but I am from West by God Virginia afterall, and I know how to dig in and get things done. I picked myself up and got help from a moving company I have heard a lot about. You must check out Sky Van Lines here! They are the best at what they do and I can vouch for their service.

And so then the sadness hit me again after the last box had been delivered to my new home.  A place that had felt far larger than my last when it was empty now seemed cluttered and cramped.  The crowning glory and probably what sealed the deal for me walk-in closet was completely full from top to bottom, side to side.  How had I not left more of this behind?  The melancholy feeling reminded me of a similar phenomenon when I’d moved to LA.  Having too much stuff makes me sad.   A space that was clearly large enough to be shared was completely crowded with all of my old stuff.  And it struck me that it was an analogy for life, namely mine.  I’d moved, but I’d brought the past with me.  How much can we fully make a change if we aren’t willing to really let go? 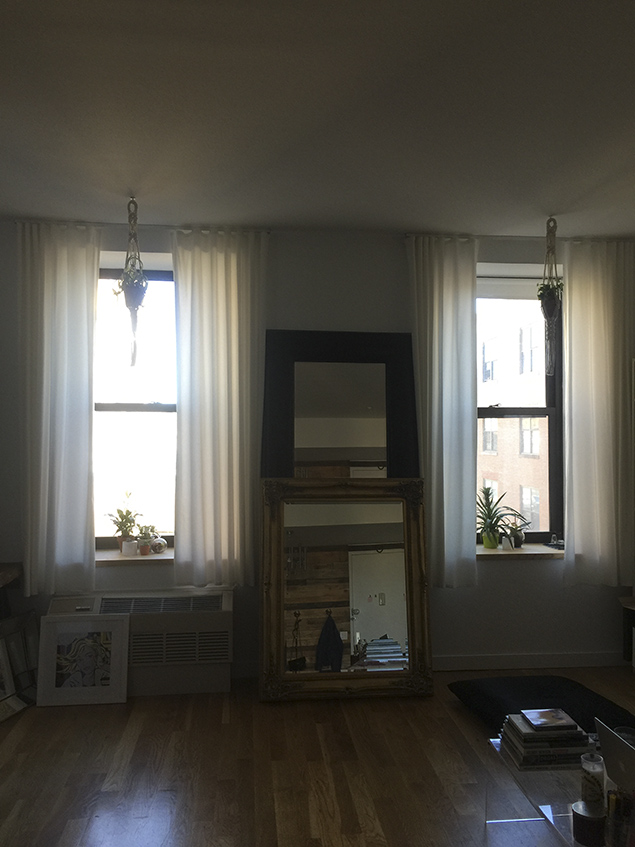 The first couple of weeks in my new apartment and new neighborhood was like a honeymoon.  I was quite pleased with myself and my decision.  I’d get up every day excited to explore and generally just get shit done.  The people at the plant store know me by name, my coffee order can be recited on sight, I met my  handsome neighbor, and I was settling in quite nicely.  Then old habits started to reemerge.  Staying out a little too late, sleeping in a little bit longer, the laziness crept in… I’d convinced myself the “bad juju” in my old apartment and that brick wall most definitely covered in some sort of energy zapping dust were the culprits for all of my past problems.  Moving was the answer to all of my restlessness.

I was half right.  Letting go of my perceived persona and comfort zone was the right decision, but I hadn’t fully committed.  I’d physically moved, but not mentally.  Much like getting a new toy only to soon grow bored, the excitement will wear off anything superficial.  My pillows were perfectly arranged and my closet color coded, but my brain still looked like that of the hoarders.  Moving can be a great catalyst for change, but only if you are willing to truly leave things behind,  because moving old boxes of stuff from one place to another isn’t really moving at all.