This time of year, when the weather goes from pleasantly crisp to shockingly cold, it’s quite easy to want to just throw in the towel, err… cashmere blanket, and just stop caring about what you wear.  It’s even quite likely that you’ve completely given up on putting yourself together and leaving the house at all.  I’ve found that I now prefer a pleasant night in rather than a raucous night out.  Not to mention, my razor blade refills have become fewer and fewer.  Pretty soon Smitty is going to think I’m fair game.  That said, there really is no reason to be a complete and utter hot mess.  There’s gotta be a happy medium between comfy sweats and club slut… right?

As I sat having dinner with friends at Barbuto on Saturday night (that glass garage door makes for fantastic people watching), in addition to the gentleman in the grey knit cap who walked by over ten times and was clearly casing the joint (or my friends), we were astonished at the parade of Paul Frank printed flannel pajama pants.  Come.  On.  Hello Kitty printed pants aren’t okay in Wal-Mart and they sure as heck aren’t welcome on the streets of the West Village.  When designers sent pajama inspired looks down the runways, I doubt Spongebob was what they had in mind.  I live in a neighborhood that is so trendy, I have to up my game when merely running to the corner deli.  Sure, I’m just on a TP run, but the rest of you are gearing up for stylish dinner dates and tequila shots at Tortilla Flats.  So, whether you’re staying in or heading out, pull yourselves together, girls. 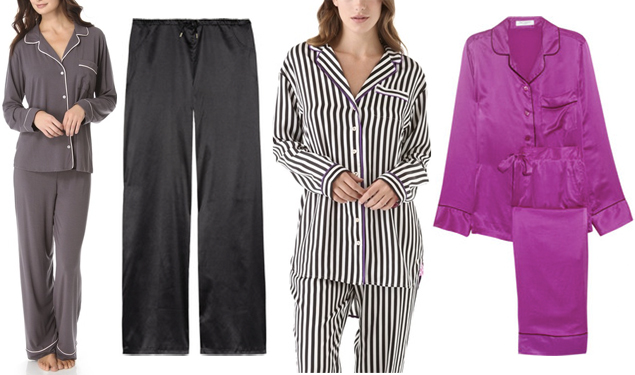