WhyDid Wisdom: The Calm Before the… 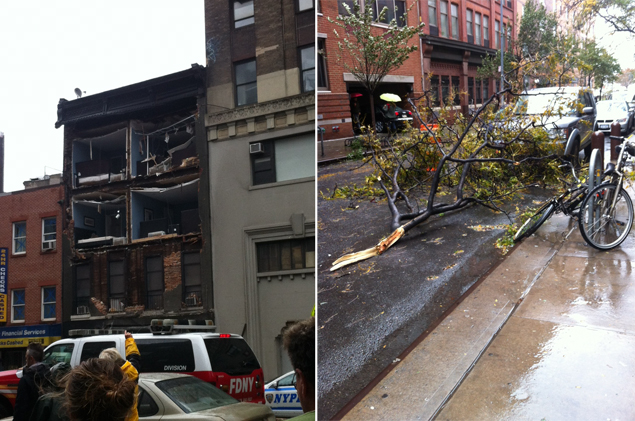 The girl sitting at the bar of the Pig and Whistle on 2nd Avenue reading an Elle and drinking a Hoegaarden at 11:35am? Yeah, that’s me. In exchange for an outlet to charge my phone, I had to purchase a beer and pretend that I’d be staying longer than it took for my phone to reach 100% battery power. (It took two beers before I parted ways with the friendly Irish bartender).

Having grown up in Florida, I didn’t think much of this impending tropical storm. Hello? I survived Hurricane Andrew. An hour before Sandy made landfall, I was debating whether or not to go to the gym. I decided against it thinking that I’d just go for a half hour longer the next day… That was Monday. My feet haven’t touched a treadmill since. I had “hunkered down” with a glass of Pinot, a bag of Sour Patch Kids (a refined palate, I know) and Annie Hall. I’d ordered in some groceries the day before because I knew that New York would use any excuse it could to play hookie for a couple of days. Why not? When the power went out at around 8pm in the West Village, I was talking to my dad and I wasn’t particularly concerned because I had a never ending supply of candles and enough wine to get me through the evening. Plus, Smitty was there to keep me company. However, Dick Smith suggested I conserve my phone battery, and who am I to argue with my father? 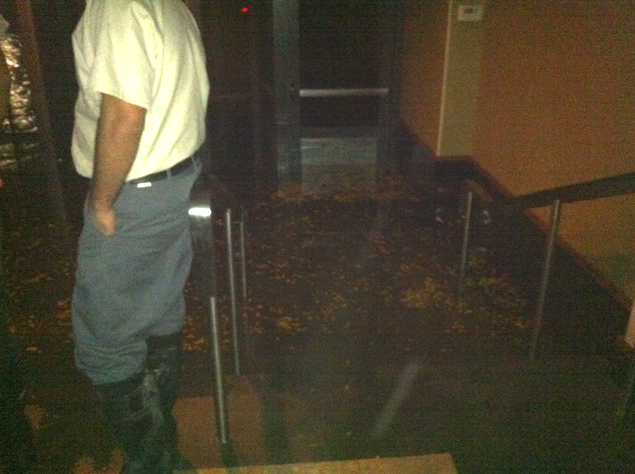 In a group text message, my friends joked that I should hop in a cab to pick up another friend without power before joining them in civilization in Columbus Circle. I considered this idea until, of course, I saw a photograph of my lobby, three feet under water, taken by one of my neighbors. Thank heavens for Facebook. I think my friends thought I was joking when I told them as much and suggested I just put on one of my miniskirts and wellies to wade through the madness to a cab. Again, I weighed my options before peering out my window to see the Audi up to its windows in water. I would have snapped a picture had I been able to see a dang thing and sent it to my friends. When a friend from LA sent a text that he hoped I was wearing a stylish raincoat, I laughed at the irony of me wearing a T-shirt that read, “Los Angeles: the greatest country in the world.” I immediately sent him a candlelit photograph for a good laugh. That’s about when the laughter ended because I soon after lost cell phone service. 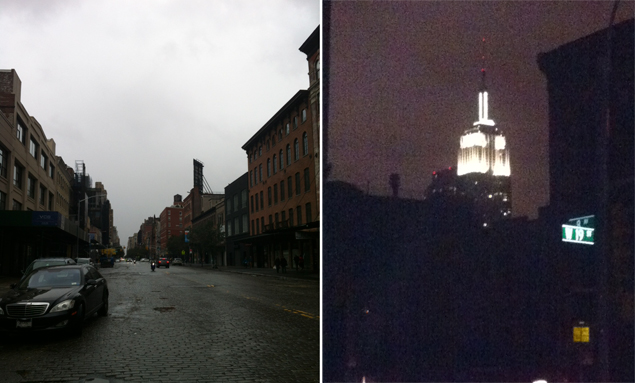 For the next 48 hours, I had no electric, no cell phone service, and was completely and utterly alone. I wandered outside at one point to make sure I was not the only one sitting in total silence and solitude. My neighborhood has never been more eerily quiet. Most often filled with spirited imbibers, tourists, and serious shoppers, there was no one to be seen or heard for blocks. I believe The Standard (God bless them) was still open, but only for their guests as I saw them turn away a couple of couples also wandering the streets from some solace. I realized there was nothing I could do except hold tight and try and keep my sanity. I read a lot by candlelight and enjoyed my fair share of the nectar of the gods (wine) with Smitty sticking close by. The best thing I could do was sleep and I did a lot that until finally I was awoken by a pounding on my door. I jumped out of bed and found the closest satin romper to make myself decent. Who the hell could possibly be at my door at 10am in this chaos? Please let it be a sexy firefighter! While it was not quite a sexy firefighter, it was my dear friend Catherine, equally as sexy. She’d come to rescue me from my solitude and in a move I never thought we’d make, we sought refuge in a coffee shop in Brooklyn. I couldn’t have been happier.

And while (thank God) my apartment doesn’t look like a life size dollhouse and my family’s home wasn’t washed away by the surging tides and I wasn’t evacuated from the hospital where I was receiving care, this little storm named Sandy certainly has opened my eyes to many things. In times of need, it always become abundantly clear who cares, who matters, and who will show up. A situation like this can have you feeling incredibly alone (like when I sat alone in my apartment and just sobbed before realizing that my neighbors probably thought I was completely insane). You realize that the guy you spend the 2% of your cell phone power and 45 second window of service on to wish, “Happy Birthday!” to receive not even a “Thank you” may not be worth your time. And the guy you’ve met once and resides in Abu Dhabi was kind enough to send a message of well wishes, may have been overlooked. The friends who check in each and every single day, and the ones who never bothered to call. Be thankful for what you’ve got and never, ever, ever underestimate the power of a storm.

Thanks for sticking with me. Means more than you know.

P.S. we’re taking bets as to when the power’s coming back on… so far, I’m winning.