Why Did You Wear That: Grammy Glory and Grammy Gross

You know, the Grammy’s always manage to get my blood boiling.  Whether Lady Gaga is showing up as an egg or Snooki just shows up, it seems like this particular award show just causes everyone to lose their darn minds.  This year was especially tragic due to the loss of the great Whitney Houston, and I expected a much more subdued, somber affair, but despite the abundance of (I suspect unintentional) black on the red carpet, it seems the night carried on as usual. 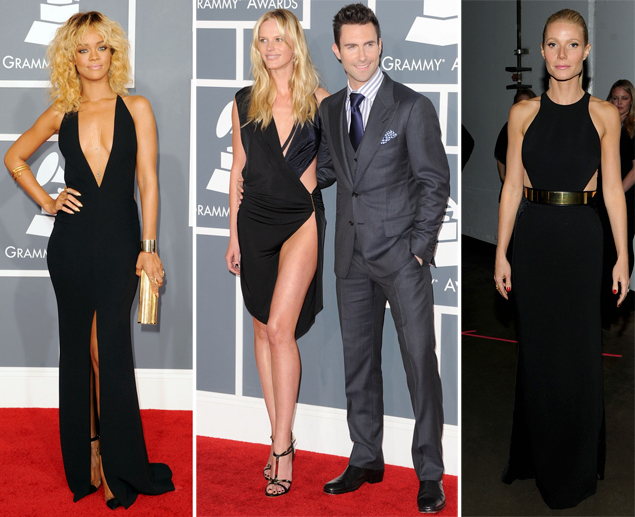 Oh- hey black dresses.  I know that we all think you can’t go wrong in a little black dress (LBD), but it would appear that’s not always the case.  Now, I know Rihanna’s Armani “collaboration” was a showstopper, but let’s be real, while not offensive, it’s also nothing that me or one of my sorority sisters didn’t don at one of our date parties.  This slinky low cut number left me less than impressed.  Anne V (beautiful arm candy to beau Adam Levine), proved that an LBD can be anything but tasteful.  We get it, your gorgeous.  Now please cover your crotch.  However, Gwyneth Paltrow wowed in this tasteful yet unexpected Stella Mc Cartney.  That, my friends, is how an LBD is done. 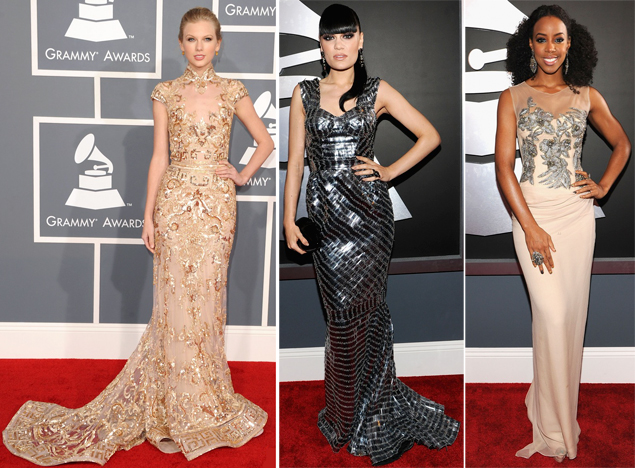 Without spending too much time on the red carpet (and my head and heart exploding), let’s just get down to business.  Three ladies who I thought stole the show, or at least the red carpet, were Taylor Swift in Zuhair Murad and an unlikely chic bun updo (let’s forget about her Yeehaw Junction performace), Jessie J in Julien Macdonald, and Kelly Rowland in Alberta Ferretti.  This is how you do elegant glamour. 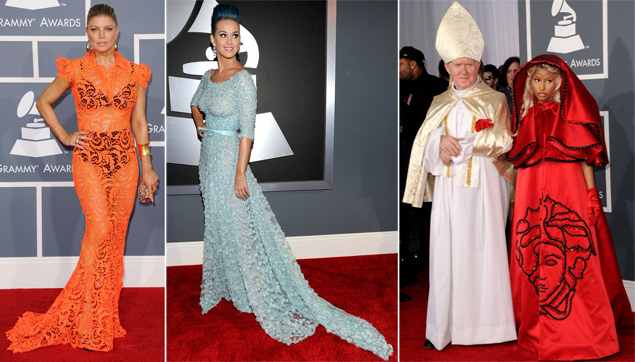 And with the good must come the bad.  While I have to say that I was blown away by the color and the detail of Fergie’s Jean Paul Gaultier get up, I had no interest in her oversized granny panties or “Grammies” as they were coined.  It’s a bit age inappropriate (and eye inappropriate), but had she chosen nude, tonal, or metallic undergarments, I might have been slightly less offended.  Katy Perry just needs to cut it out with her crazy colored hair (this combination has me thinking she’s gunning for a Smurfs sequel), and this Elie Saab dress leaves me longing for that ridiculous light up number she sported.  The most offensive by far, however, was Nicki Minaj in Versace.  I don’t care if you showed up with the pope.  This look will have you saying Hail Mary’s from now until eternity.  Why don’t you and Gaga just have a “weird off” and see who can outdo each other once and for all.  Kind of like a dance off with clothes.

Nonetheless, the Grammy’s was full of fantastic performances and plenty of fun… and while my blood pressure may have peaked… I’m certain I will tune in again next year just to get another glimpse of crazy.