Why Don’t You Do What You Love? 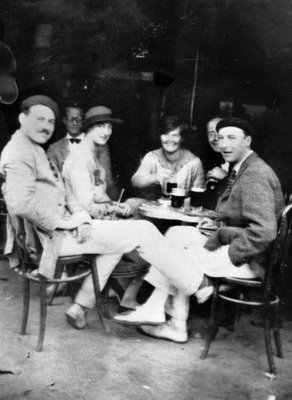 Recently, I finished a really great book called The Paris Wife (by Paula McLain).  And while you probably think this is going to be a painfully dull book review, it’s not… although if you’re looking for a great end of summer read, I certainly suggest that one.  Without digressing too far, the book is basically written from the point of view of Ernest Hemingway’s first wife, Hadley Richardson.  It chronicles the early years in Paris where he penned one of his more notable novels (though there are many), The Sun Also Rises.  During the 1920’s,  those considered to be “interesting” were living in Paris.  Some hypothesize it had something to do with the exchange rate, but others insist that this was a place where writers and artists alike could be creative.

After finishing this book, it became very clear to me that things have certainly changed since then.  Some for the better, but one thing very much for the worst.  While as a society, we’ve evolved in terms of technology and modern conveniences but, we’ve managed to slip backwards in regards to the arts.  Sure, there are people who call themselves “artists”, but it seems to me that most people doing whatever it is that they do, are doing it for the money rather than the actual passion that should propel the craft and that comes across in the final product.

Instead of making something truly authentic, people make what will appeal to the masses.  They create what will be considered commercially acceptable and will bring in the most cash.  They’d rather sell records and hit sales levels than break ground and be true to his or her talent.  Sure, I like to bust a move along to a poppy Katy Perry tune, but can we really call that art?  What happened to real bands that play real instruments and don’t rely so heavily on autotune?  When’s the last time you saw a painting by someone currently living that truly moved you?  Banksy is cool, but is graffiti really comparable to canvas?

When I talk to friends, it seems we are all stuck somewhere in between doing what we love and doing what will pay the rent/mortgage/Louboutins.  I feel quite certain that this has a lot to do with why there is a disappearance of people dedicated to doing what they love.  It appears our generation has no soul.  We’re driven by money and “stuff.”  I’m not saying that we all need to be a bunch of emo hipsters, but I do think it wouldn’t hurt to “gut check” from time to time to make sure we’re all living lives that feel authentic.