You Make Me Wanna Snoop 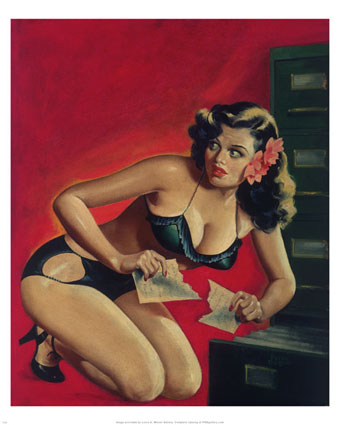 In reference to last week’s post about the woman who had never seen her boyfriend’s house, I wanted to re-visit the topic of snooping. To me, it is baffling that this woman would not have done a little legwork to try and discover what the heck this guy was hiding. When I start dating someone, I already know what his favorite pastimes are, his mother’s maiden name, and, of course, what his ex looks like. Needless to say, I don’t really like surprises.

Most of you assumed that the gentleman in question was obviously living with his wife or girlfriend. I tend to agree. This leads me to one of two conclusions: either he’s a really good liar, or she is just really effing stupid.

Since I have a hard time believing that anyone is that great of a liar, I wonder if this woman is missing the “woman’s intuition” gene. As women, we generally know when something in the milk ain’t clean. Why, oh why did her antennae not go up? I would be a liar to say that I have not done some hardcore PI work in my day. I am so good at digging up dirt, that sometimes, my friends have asked for my assistance and have suggested that, perhaps, I missed my calling.

Even the trickiest of the tricky could not dupe me (I’m talking to you, Mr. I Saved My Mistress as My Brother in my Phone). While, I like to know what’s going on, some have argued that snooping is the equivalent of opening Pandora’s box. What happens when you scroll through your man’s phone and don’t find anything… this time? Now you’ve started a habit and trust me, it’s not an easy one to break. My only defense for snooping is that when you feel like something’s up, you’re probably right. My instincts have never steered me wrong. If you need the proof, then you may have to snoop- just be ready for what you might find.

After being in a healthy relationship, I have not felt the need to snoop or check texts or emails, which further validates my “woman’s intuition” theory. Sometimes, I think people who don’t look are scared of what they might find and are really just turning their heads. What do you think?

In most cases, when the urge to snoop comes about… it’s probably time to re-evaluate the relationship. Whether you find something or not, you’re on a one way track to an unhealthy relationship. Run for your life!