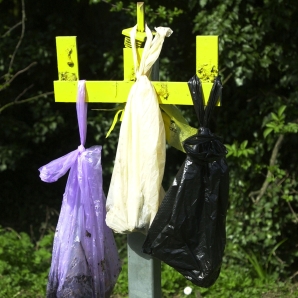 As we made our way up Runyon for the second time the other evening, we spied a plastic bag full of doggy doo. Hm… I understand that you are to clean up after your pooch, but wouldn’t you say that leaving it IN a plastic bag is worse than just leaving the doo right where it is? I should say so. While stinky and potentially hazardous to the bottom of your shoe, at least the naked doggy doo will eventually decompose as it would in nature and disappear as opposed to wrapping up the stinky doo in a pretty plastic bag and leaving it to sit and rot and never biodegrade.

This led me to thinking about people and their relationships. Why, oh why, can’t some people just seem to let things die? Why must they insist on wrapping up their doo doo in plastic bags and leaving it to fester?

Sometimes, people have a difficult time letting things go, and this is understandable, but, for those of you who just can not seem to get the point, I’d like to send you a copy of He’s Just Not That Into You. Painful as it may be, at times, it is best to just walk away with your head held high and dignity still in tact. So many times, we try and argue with the outcome and in reality, it’s never going to change anything.

Many bloggers and media personalities like to exploit their relationships publicly. I’m not exactly sure whether it’s in attempt to lure their lost lover back or just to draw more sympathy. Either way, it merely ends up making said individuals look sad and desperate. (Neither of which is particularly appealing to the opposite sex). If they were smart, they’d lay low on the love front. For example, I’ve clearly got quite the arena for blowing up all of my ex’s spots if I so choose to. However, I find this to be a little tacky and I prefer a bit of mystique around my personal life (if I even have one). I mean, to each his own. We’ve all go to pay the bills, and if that’s how you’ve got to drive traffic or to score a date, then so be it.

That being said, even people in every day life do the same thing. They broadcast inane details via Facebook and Twitter in an attempt to sound like they are “having such a blast!!” and are “soooo over you!!” when in reality, a little bit of silence would do you some good. Bloggers are making a living from it, but what are you gaining?

Why not just let the poo disintegrate? Why wrap it up in a plastic bag if you’re going to leave it behind? Maybe it’s best to let a sleeping dog lie. Tiptoe out the backdoor and let him drool.