Barking Up the Wrong Tree 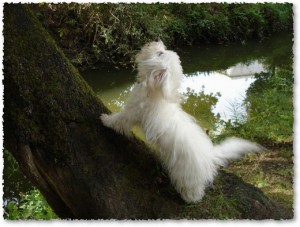 The other day I had a pretty hilarious, yet disturbing conversation with a guy pal of mine.  He has a long term girlfriend who he seems to care about, but he does have a bit of a “roving eye” to put it lightly. He mentioned that his gf is always halfway to a meltdown. I can’t say I blame her. Love him, but I’m pretty glad he’s not my boyfriend.

Basically, the conversation was in regards to her concern about a close girl friend (as in platonic friendship) that he has. His girlfriend is convinced that he’s sleeping with this friend. He joked that she was “barking up the wrong tree” because he is not in any way involved with his friend in a sexual manner, but he does have eyes for someone else. His girlfriend seems to have forgotten one of the cardinal rules: “It’s NEVER who you think it is.”

I’ve been in this position and I remember an older and wiser friend saying that very phrase to me.  I was convinced my ex was sleeping with one of his girl friends and I would obsess over it and drive him nuts about it (until I met her in person and realized she was no threat). Meanwhile, he definitely was sewing his oats in different pastures… just not the ones I suspected.

This raises a couple of red flags for me. One being, that a woman’s intuition is nothing to be taken lightly. He’s not sleeping with his friend, but there is obviously a reason why you are even worried about such a thing. Look deeper into why it is that you don’t trust your boyfriend.  Former mistress, Sarah Symonds, summed it up best by saying that if you feel like something is going on, you’re probably right.

I basically try and live by that little mantra. If something in my gut doesn’t feel right, I no longer ignore it. It’s only a matter of time before the truth rears its ugly head. So rather than drive yourself insane (incidentally driving your boyfriend insane), why not listen to that little voice. I’m willing to bet it’ll never lead you astray.