While talking on the phone to my dear oldest brother last night, he reminded me of something that women tend to overlook. While we’re worrying about which bag to carry or if we need a necklace, we’ve forgotten that the most important accessory for a woman is merely confidence.

We were discussing how a lot of women throw their bodies out there on display for men to ogle.  While these women will get stares and attention (and probably a few free shots of Patron) they are getting the wrong kind of attention. You would initially assume that a woman whose top is cut so low it shows her navel is confident when in reality she is the polar opposite. Typically, the woman who relies on simply her body and sexy clothes to get attention is so uncomfortable with herself that she believes her sex appeal is the only way to get a man’s (or woman’s) attention.

Granted our society is totally oversexed (watch Gossip Girl lately?) and that may have something to do with our perception of what “sexy” is.  I mean, no guy ever goes up to a woman in a bar and says, “Damn, girl! You have a really hot sense of self-fulfillment. Lemme get them digits!” (Or at least I really hope no ones does that). 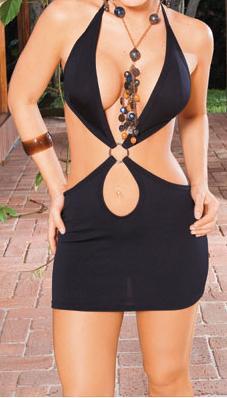 Anyway, big bro also pointed out that for a guy, it’s not always the “prettiest” girl in the room who grabs your eye.  It’s the girl who has just a little something about her. Dare I say, je ne sais quoi. A little mystery, a big smile, a glimmer in her eye.

Now don’t get me wrong, I love a short skirt or a cleavage baring top from time to time, but at the same time I also love a great fitting pair of jeans and a snug turtleneck (covered from neck to ankles). It just basically boils down feeling good about yourself on the inside. Quite honestly, I get hit on much more when I feel like I’m totally dressed down. I don’t actually know how to explain that (because I’m not a guy) but I do think it says something.

So what is the absolute most sexy thing a woman can wear? Confidence.