Last night marked MTV’s 31st Annual Video Music Awards and also the fact that I’m way too old to be watching it.  My friends and I kept exchanging puzzled looks as one unrecognizable (to us) tween took to the red carpet after the next.  I had never been so excited to see Gwen Stefani or Jennifer Lopez as I was last night.  Phew!  Somebody we knew.  It became quite clear as to why E! has cornered the market on red carpet pre-shows.  As I quickly found myself on the brink of a melodramatic meltdown, I yelled at my TV,   “Sway, WHO ARE THEY WEARING?”  After having cooled my rage with a glass of prosecco, the actual show began.

Within seconds of the opening act, I was concerned that Nicki Minaj had somehow pirated the entire event as there was much more booty on stage than on any ship.  She became this year’s Miley while pirouetting her posterior to her current single, “Anaconda”, which left me hoping Sir Mix A Lot was somewhere wiping his own rear with all the royalty money he received from that song.  She then joined Jessie J. who forgot her pants and Ariana Grande who appears to have a perma hairstyle for their song, “Bang Bang” complete with wardrobe malfunction.  She later joined Usher for his song, aptly named, “She Came To Give It To You.”

Right around the time I’d given up on humanity and started Googling how to obtain an Australian work visa, Miley Cyrus shocked audiences again. This time, however, it had nothing to do with flagrant twerking or her wayward tongue. When she won the VMA for Video of the Year, instead of accepting the award herself, her handsome mystery date took the stage.  He identified himself as “Jesse” and proceeded to deliver a touching speech revealing that he, himself, had grown up homeless which was hard to imagine as he looked like far less homeless than the boys of Five Seconds to Summer in his well tailored suit.  He encouraged viewers to learn more about My Friend’s Place and to get involved by visiting and donating on Miley’s site.

But (with a capital “B”)  Queen B., herself, Beyonce, was not about to be outdone.  Bey performed for a solid fifteen minutes in a stunning jewel encrusted leotard before accepting the Video Vanguard Award from her husband, Jay-Z and the absolutely adorable Blue Ivy.  If all those divorce rumors do have any merit, she should have picked up an Oscar as well.

The other big “B” for last night had to be for Balmain as Jordan Dunn, Chanel Iman, Joan Smalls, and Kim Kardashian all wore the label.  Pro-tip: Do not show up to an awards show wearing the same thing as a supermodel.  While Katy Perry and her date, Riff Raff, gave a nostalgic nod to Britney and Justin, everyone’s favorite good girl wore a romper so short, she could have been a Minaj backup dancer.  Black was a red carpet favorite, but all renditions from sheer paneling to leather pants felt fresh and innovative rather than basic and boring.  Red, pink, and blue were the other colors that were most prevalent, mainly in jewel shades.  While everyone looked “nice,” I didn’t feel floored by anyone in particular… except for Amber Rose, that is. 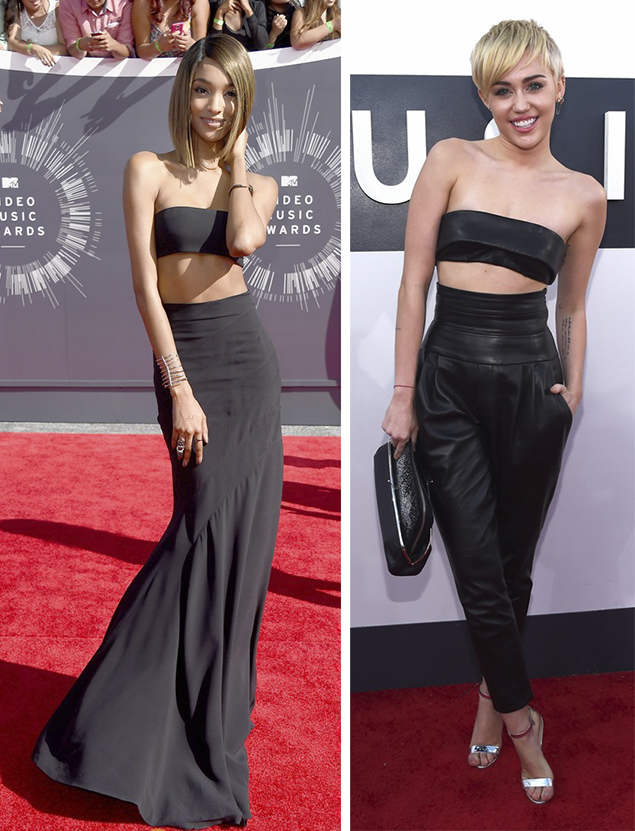 Anything but Basic Black: 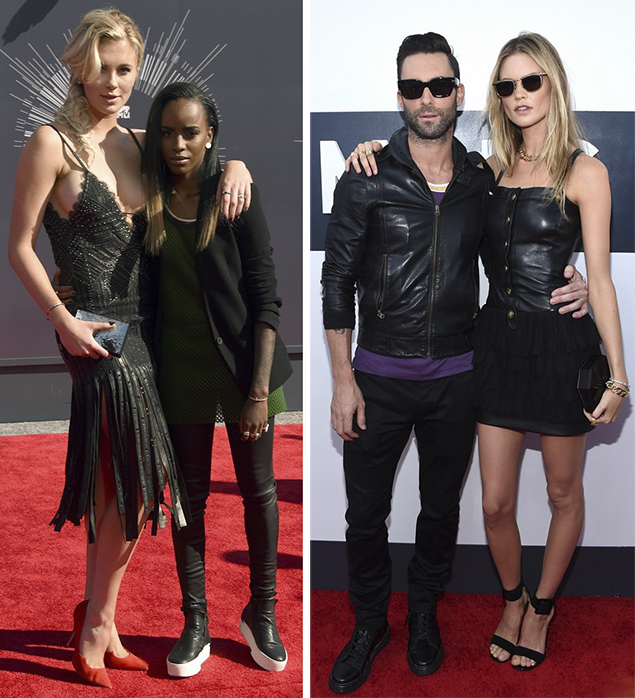 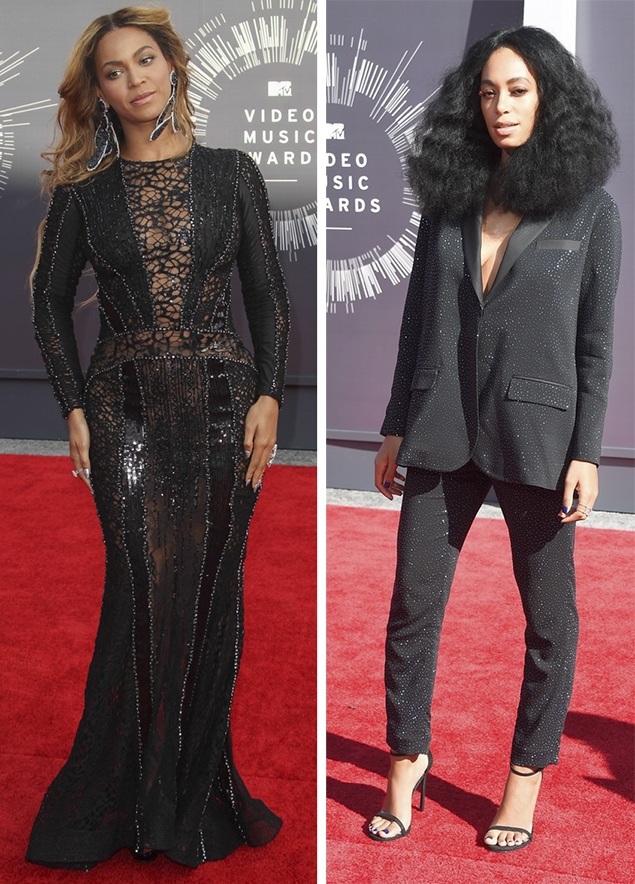 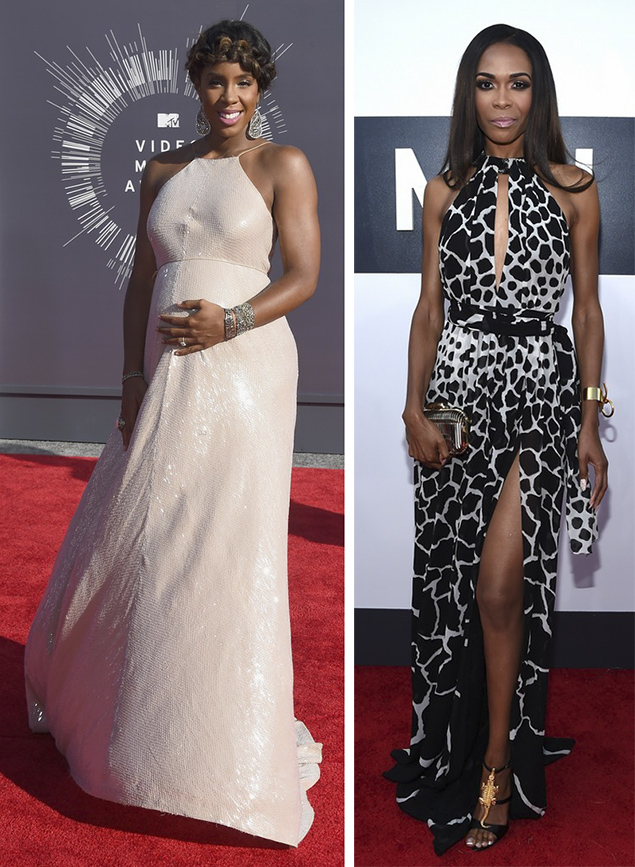 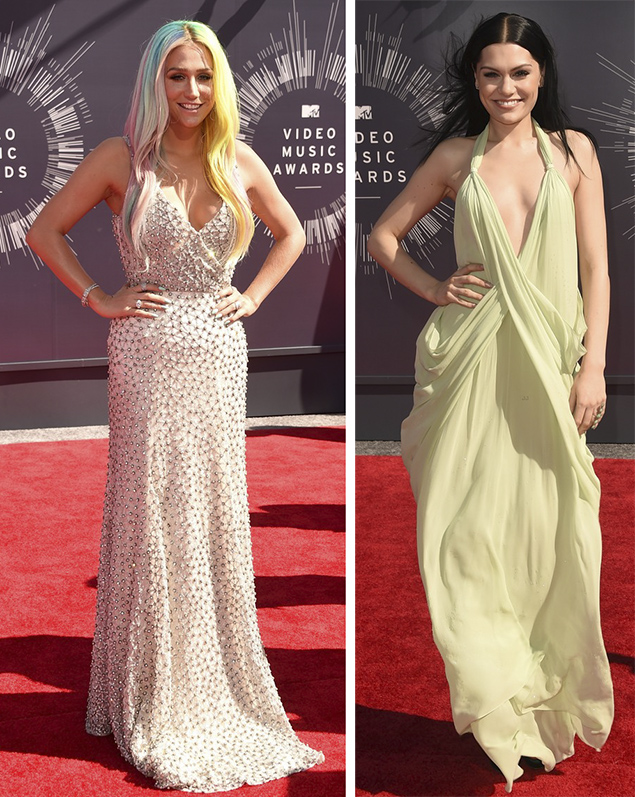 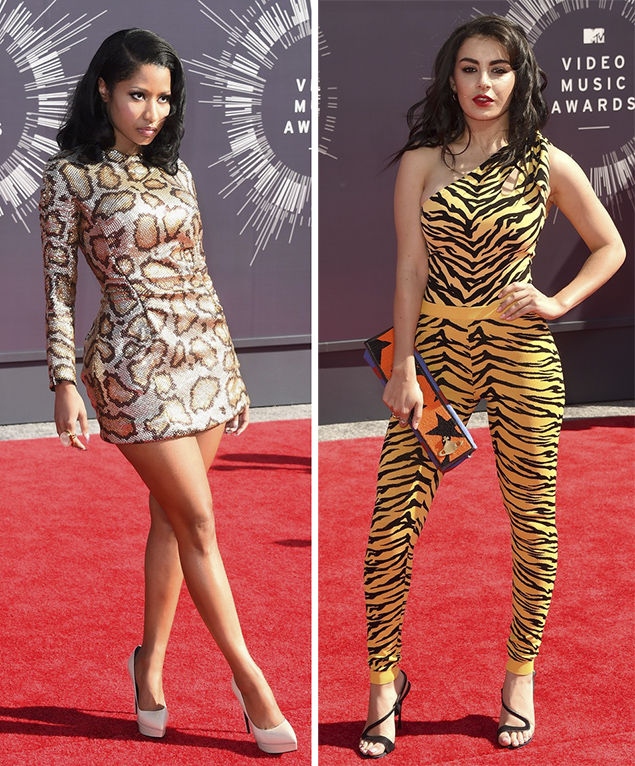 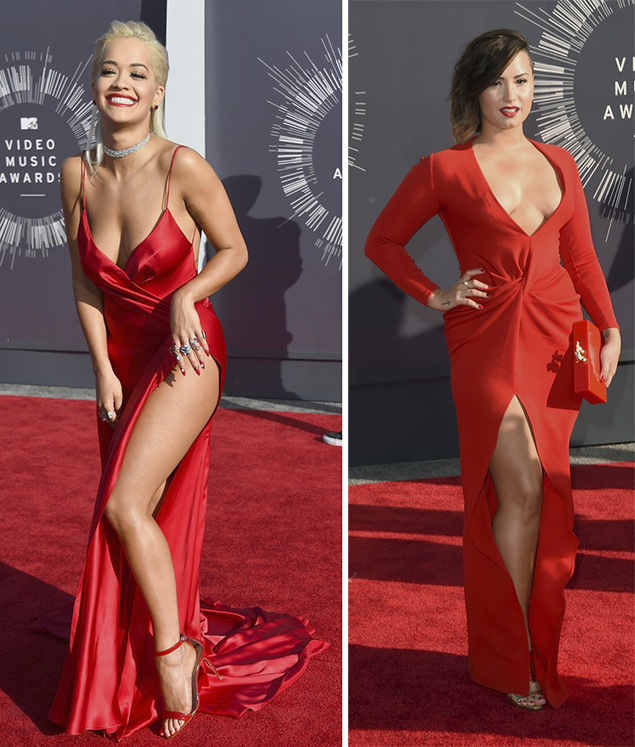 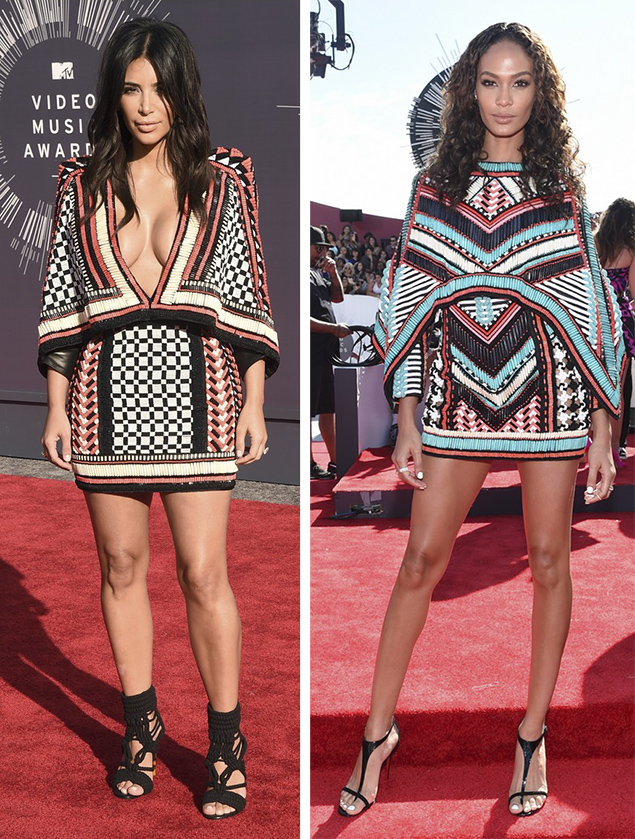 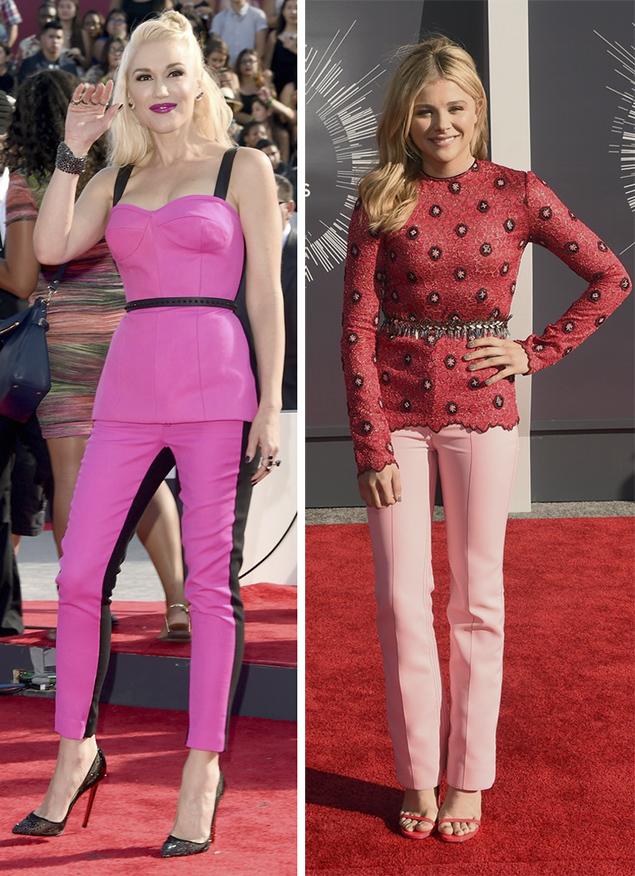 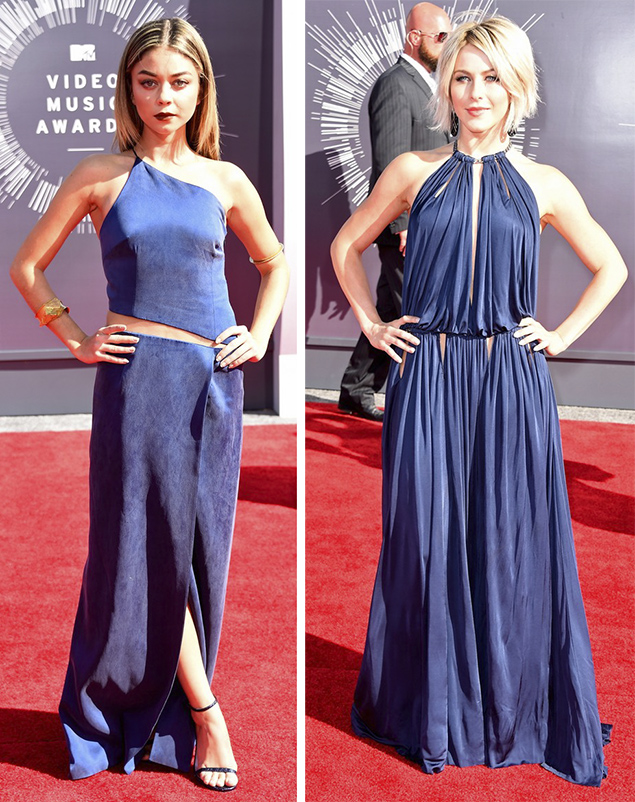 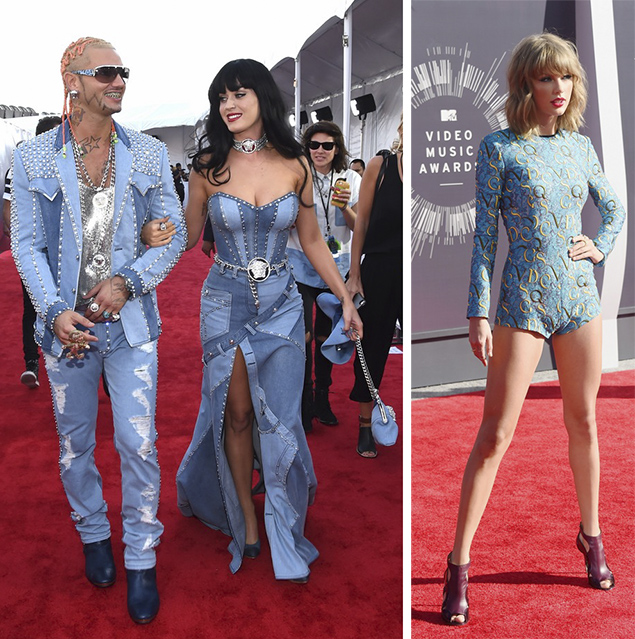 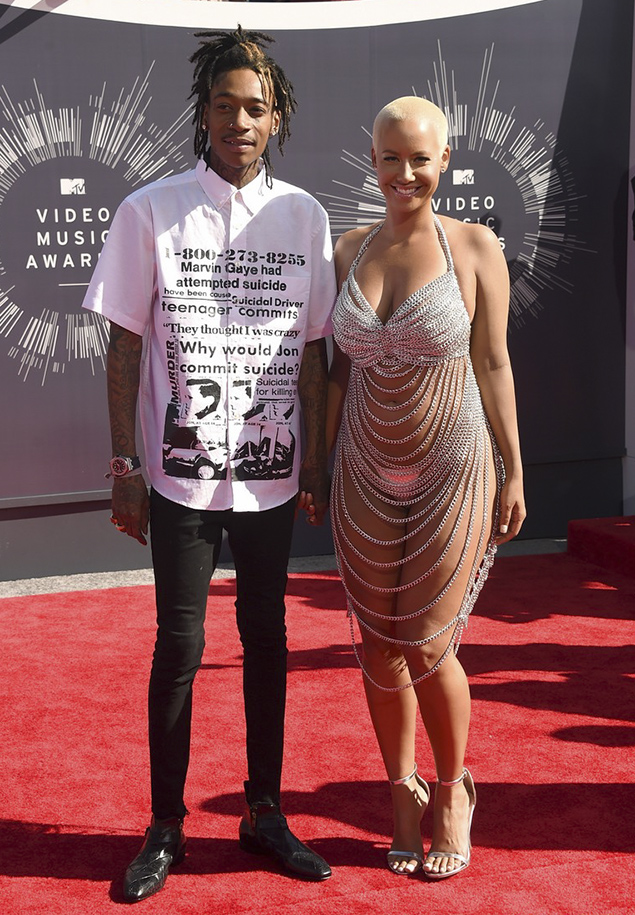