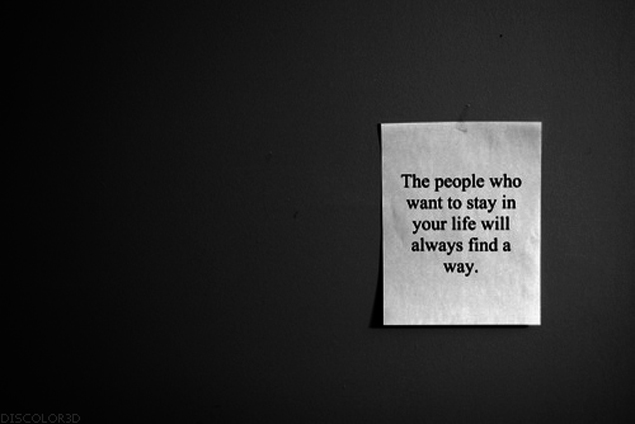 We’ve all seen the quote above.  Maybe we’ve even posted it somewhere.  We pass around all these inspirational quotes on social media sites and we like the shit out of them and put the “raise the roof” emojis in the comment section, but how long do those messages actually stick with us?  In a society with fleeting attention spans being diagnosed as ADD, we’re on to the next photo, conversation, or task in the swipe of a finger.  As great as all these digital “good vibes” are, how many of us are actually living them?

As I nearly melted on the roof of Soho House earlier this week with someone who came quite close to self eliminating himself and is still perilously toeing the line, I explained my theory to him.  For a long time I held onto people in my life who probably didn’t want or better yet, deserve to be there.  I thought that made me a good friend or a loyal person.  I was giving it the ol’ college try.  I was expending lots of energy on people and situations that were serving no purpose in my life and adding no extra happiness or value to my existence.  In reality, they were holding me back from becoming the person I want to be and from the things I really want from life.  It’s a sneaky form of self sabotage that I didn’t even realize– because let’s be real– I excel in self sabotage.  I love putting my little hand right on that still lit stove.

When I stepped back and released my death grip on relationships, the good ones survived and the bad ones choked.  By basically doing nothing except removing myself from the situation and seeing the relationships objectively for what they were, I eliminated a lot of unnecessary drama, hurt, and general fuckery from my life.  I felt lighter, I had more time to spend on things I actually needed to be doing, on people who I enjoy my time with, and didn’t really miss the past at all.  It was literally a relationship detox except there were no violent mood swings, hunger pangs, or wheatgrass shots.

The entire process was pretty much effortless, something else in which I excel.  I didn’t have to sit and ponder and sigh and shrug causing unneeded wrinkles and excess stress as to whether that person should stay or go.  They were doing it for me.  They were eliminating themselves from my life by acting like assholes and I didn’t have to lift a finger.  I just sat back calmly and watched it all play out.  It was survival of the fittest for relationships.  Darwinian.  Hence, “Darlimination.”

After commenting on the flecks of rose gold nail polish (Essie Penny Talk) still clinging to portions of my nails, he nodded his head in agreement (a real life “raise the roof” emoji).  I should probably copyright the name (and probably eliminate him for his manicure commentary, but there’s nothing a chocolate covered cinnamon gummy bear can’t cure).

A perfect example of Darlimination is something that happened a couple of weeks ago.  I had sworn off one very toxic and recurring relationship for the 400th time, and a friend of mine who’d I’d been spending a lot of time with had been missing from the scene.  During that time period, I woke up every morning and was happy.  I didn’t have anything really giddy worthy to smile about- no love life to speak of, still not able to make it rain with hundreds on a Tuesday, and an extra five pounds that seems to have signed a ten year lease and invited over some friends.  However, I was happy.  Like smiling at strangers (okay, strangers’ dogs) happy.  There was absolutely nothing that could bring me down, not even an Instagram feed strewn with photos of an ex and his new Snooki lookalike girlfriend.  Nothing.

And then my little Narnia was blown to bits after allowing both of those emotional vampires back into my life.  I didn’t recognize it immediately.  Well, the bad ex-boyfriend, yes.  How many times must I sing that sad song?  I was depressed and drained and didn’t feel like doing much of anything with anyone.  Poor Smitty.  I became aware that I was letting other people’s bad energy, shitty attitudes, and lack of shared goals and values pollute my otherwise very pretty world.  As much as I’d wanted to share my happiness and hoped it would rub off on them, they just wanted to flounder about in misery and that’s not my kind of party.  So after one too many irrational temper tantrums incorrectly directed towards me and another disappearing act by him, I let them go (“hand wave” emoji).

While this all may sound very selfish, anyone who actually knows me, knows that I’m probably too nice.  But we all have our breaking points and when you start to give too much of yourself helping others, you’re not only hurting yourself but hurting them too.  If you offer someone a piece of your world and they don’t take it or treat it like garbage, let them go.  Smitty is the only one allowed to shit on my floor and even he knows better… most of the time.  Not everybody fits into your life and instead of feeling hurt by that, feel thankful you’ve been shown that they don’t.  Now you have more time and more space for the people and things that do fit.  Rip the Band-Aid off and move on.  What is meant to stick will always stick, what doesn’t wasn’t meant for you  and will disappear.  You just have to learn to be okay with that.  If you’re feeling sad and can’t pinpoint the source, do a relationship audit and figure out if you’re clinging to emotionally depletive relationships.

On the flip side, don’t forget that if you want to be in someone else’s life, you need to put in the effort and be the friend, lover, human that deserves to be a part of that person’s life.  Think about what you’d expect because remember, you can just as easily be extricated.