Why Did You Wear That: Trapped in the Closet, or At Least I Wish I Was…

Award shows always manage to leave me scratching my head and trying to figure out just how much wine I ingested in the last two hours.  It’s as if celebrities save up all their crazy for these star studded events and then unleash it on their adoring fans.  Fortunately for us, it’s all caught on film to be watched time and again for days to follow.  These evenings provide news sources plenty of ammunition and the platform to play things out and beat a dead horse.

Speaking of which… The only thing weirder than Lady Gaga’s arrival on a wind up horse, was her awkward performance with president R. Kelly who probably should have stayed trapped in the closet.  I didn’t have too long to wonder what the real purpose of this horse was or whether Ke$ha and Gaga are actually morphing into the same person, because moments later I thought I spotted a red carpet crasher, but it was just Marc Anthony who looked as though he’d been halfway through his Sunday stack at The Griddle when he realized, “Shit, that award show is tonight.”  His former better half, Jennifer Lopez, more than made up for his failworthy flannel with a high energy tribute to Celia Cruz.  It wasn’t all cringeworthy though.  Watching Rihanna accept the Icon Award from her mother even made me tear up and Christina Aguilera’s soft vocals during her performance with A Great Big World had me fall in love with her all over again.  Just when I started to think that maybe this award show was bringing back a little bit of class to the music world, Miley showed up in a cat covered two piece leotard and I had a hard time deciding which cat to look at because the one lip synching behind her kind of stole the show.

But alas, what we (at least I) bother watching award shows for… the fashion.  If you weren’t wearing white, you were wearing black- or a combo of the two.  This, of course, makes me happy because my second favorite “color” behind black is white.  If you weren’t wearing one of my two favorite shades, you were wearing metallics or heating things up in fiery reds and oranges.  To be clear, just because I post it below doesn’t mean I like it.  It just means it happened and I firmly believe in being informed.  Rihanna, Nicole Richie, Ciara, and a very Kardashian-esque Naya Rivera were a few of my favorites, while most of the others left plenty of room for improvement. 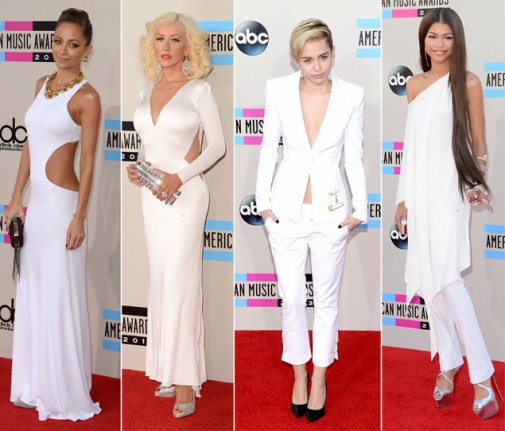 Bad Bitches are the New Black: 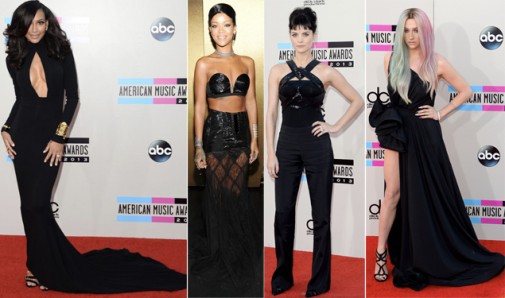 Black and White and Chic All Over: 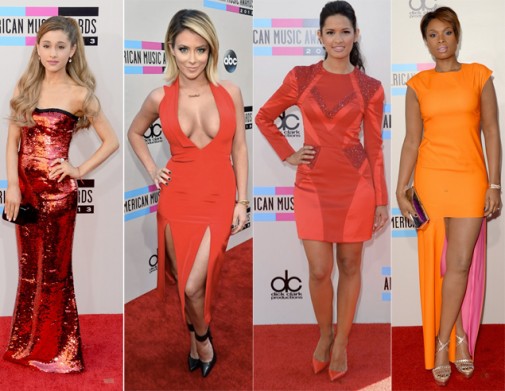