WhyDid Wisdom: Pick of the Litter 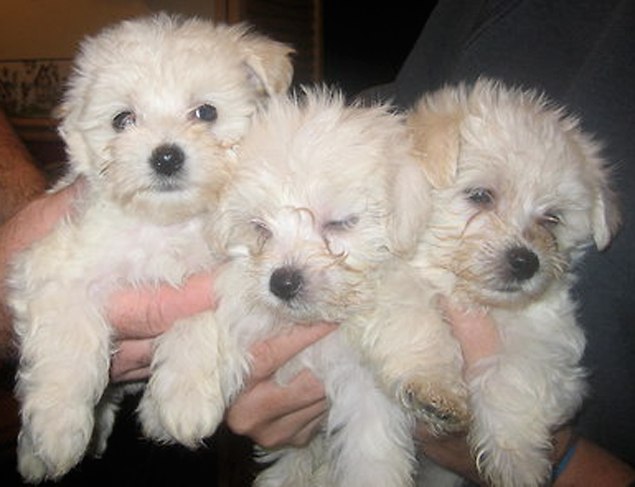 Note: Smitty is not in this photo.  He was busy.  Being coddled by his new mom/soul mate.

I remember sprawling out in the grass in Central Park with my girlfriends one sunny afternoon.  We were killing two birds with one blanket:  catching up on the latest gossip and checking out what kind of hunks Manhattan had to offer.  Forget the Meatpacking District, Central Park was a pure meat market on that particular Saturday.  While scanning Sheep’s Meadow for Big Apple’s buffest, one Adonis-like gentleman caught my girlfriends’ eyes.  As they began to “Ooh!” and “Ahh!” I lowered my Oliver Peoples, assessed the situation, and stated very matter of factly, “His nipples are HUGE!” and resumed scanning that month’s issue of Elle.  My friends gave me a lot of grief for my observation and it became a bit of an ongoing joke, but here’s what: I’ve always known exactly what I’ve wanted and never seen any reason why I shouldn’t have it.  And that includes the circumference of my potential mate’s areola.

Whether it’s been a dress, apartment, hairstyle, or shoes, I knew it the moment I saw it.  I have laser sharp focus when it comes to such things and I really can’t be bothered with anything subpar.  I’d rather have nothing at all than second choice.  Now, I get that I may sound cold and some people may call me critical, but I’m not suggesting we go around judging everyone and everything.  That’s not our job.  Plus, I doubt I could stand up to my own scrutiny.  I’m simply suggesting that in matters of the heart, we should have some standards.  If I’m willing to hold out on a pair of shoes, why wouldn’t I do the same for love?

Many times I’ve referenced the sweet, sweet love of my life, Smitty.  He’s the best friend and longest relationship I’ve ever had… and he was the pick of the litter.  I got first dibs on the four maltipoo pups and I don’t think any of this is a coincidence.  I saw him and I knew.  Now, granted, he really had no choice in the matter… he was coming home with me whether he liked it or not, but it’s a prime example of seeing what you want and going for it rather than taking the little one in the corner who looks sad because you feel bad for him. Analogously, adopting a cat isn’t that bad of an idea, for the charisma & grace that trails them is unparalleled in the animal kingdom. Hence, if you change your mind, consider getting all the prerequisites you’d want from Cat World.

How exactly does this all relate to love?  Well, having grandiose ideas about what you’re looking for in a partner can be off-putting to many.  They may think you’re being idealistic or just too picky.  A lot of people will try and sell you on the dream of, “Oh it might not come in the packaging you think” or, “You should give him a chance.” AKA, lower your expectations. You know what that’s called? Settling.  And guess what?  I’ve done that… and look how well that turned out!

So many times I’ve gone out with guys who are “meh” out of sheer boredom or just hoping that they would grow on me and turn into some fabulous Prince Charming once I got to know them.  Well, here’s the thing.  They grew on me, alright.  Like barnacles.  Nothing good will come out of dating a guy who you aren’t initially interested in.  If I don’t like your face now, I’m certainly not going to like it ten months in once I’ve found out all of your bad habits like leaving your socks on the floor and never folding your towel.

So, I’ve just stopped doing that.  I no longer spend time on the “so-so.”  I don’t bother wasting my new Alexander Wang on just any ol’ schmoe.  I’ll save it for someone worth impressing.  I turned down multiple gentlemen callers on more than one night this past week because I’d really just rather sit home and hang out with my dog, a glass of wine, and an interesting book than exert the insincere effort.  In the past, I’ve found myself gazing across the table thinking… let’s pretend for a moment that I care…

There is nothing wrong with holding out and being a little bit picky.  Perhaps my “near marriage” experience has changed the way I feel about rushing down the aisle just so I’m not “alone.”  Alone is a whole heck of a lot better than a bad relationship.  So, if the guy is wearing a gold watch at the gym, you don’t need to cut him a break.  Move along and wait for your pick of the litter.  Here’s to being picky.  I will gladly sit here solo with my glass of wine, Smitty, and Anna Karenina until Prince Charming does, in fact, show up.