Would You Wednesday: Going the Distance 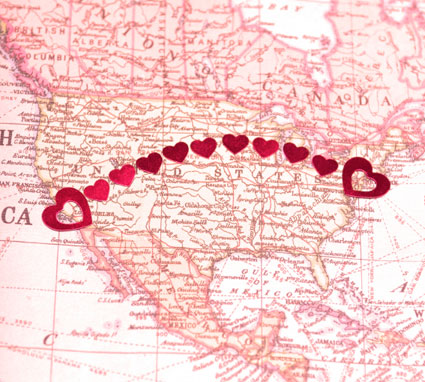 Luckily. I, myself have never really had to deal with a long distance relationship.  However, I know quite a few people who have dabbled in frequent flyer flings.  I require far too much time and attention to be a candidate for one.  One thing I’ve learned from talking with friends who have decided to partake in pen pal passion, is that the math is simple.  How ever long you’ve been dating… divide it by 3.6.  Let me break it down for you… If you are lucky, you will get to see your beloved every weekend for two days.  So two times fifty two (that’s 104)… Not a whole lot considering there are 365 days a year.  So, basically, if you’ve been dating for a year, you’ve really only been dating for three months (tops).

Another thing that was brought up was the fact that a long distance relationship can sometimes deflect the real relationship flaws because you are only able to spend a short amount of time with someone and then return to your normal life.  So, anything that may have been going wrong over the weekend is forgotten about in the lag time between your next flight.  When you can only see someone for a short period of time, you are on your very best behavior.  Day to day life and challenges are not really a part of your relationship.  People can show you the parts of them that they want you to see and nothing else.  While emailing, texting, and Skyping, you can “play a role” of who you want your mate to think you are.  It is incredibly difficult to really know someone who is thousands of miles away.  Often times, when the real life proposition of moving to the same city is breached, it is quite scary.

Though sometimes it is unavoidable, I think that long distance relationships are really just time fillers for people who don’t really want to commit.  Unless there is a plan and time period for one (or both) party(ies) to relocate, it’s just like being in a holding pattern until you’re ready to land.

*P.S. there are certain clauses to this.  Like if you happened to be dating before one of you had to move and have every intention of reuniting shortly.