Why Did or Why Don’t: Man Bun in the Oven

This summer, men took accessorizing one step further by donning what we now know as the “man bun.”  And while I do have a healthy portion of male readers (God bless you analytics), I will not take the blame (or credit- depending on your stance) for the trend just because I’ve made more than one brilliant top knot tutorial (you can learn “how to” here and here).  For the past decade or so, men hadn’t had much wiggle room when it came to socially acceptable hairdos except the beard which they could style at home, rather than going to the barber for such a task.  There’s been the classic buzz cut, the Bieber bob, and that whole spiky gelled situation that ruined shams worldwide.  And let’s just be thankful we all survived the “faux hawk.” You can check these awesome hairdressing scissors most barbers preferred.

While the ponytail is nothing new (hello, Karl Lagerfeld), men decided that wasn’t good enough and began piling their locks on their heads way atop or grazing the napes of their necks, real estate formerly reserved for sweet nuzzles from their beloveds.  I’m not sure who can specifically be appointed as the official firestarter of this follicle free for all, but I think Colin Farrell was one of the male topknot pioneers.  To be fair, average citizens started sporting it well before it became mainstream.  I had an ex-boyfriend several years ago who began experimenting with the trend.  Granted, he also thought waking up and drinking the leftover beer on his nightstand from the night before was par for the course.  In any case, this hair-rowing (see what I did there?) hairstyle has taken over from east to west coast, north to south.  There are several blogs dedicated solely to the praise of ballerina buns fit for Baryshnikov (exhibit A and exhibit B) and The Awl even created a brilliant collection of the male topknot in its natural habitat. 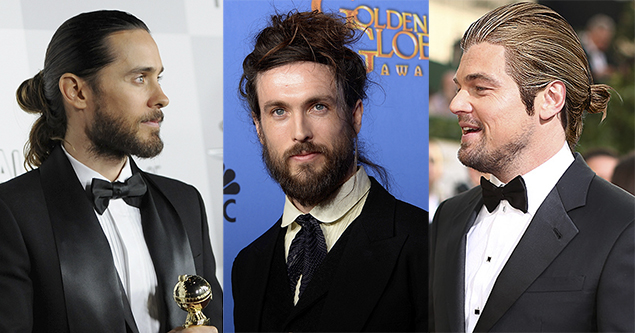 Much like the beard bubble was predicted to pop (and has yet to do so as late adopters are STILL jumping on the bearded bandwagon), the man bun would appear to have a shelf life itself.  Interestingly enough, it seems that the topknot and beard are not mutually exclusive and often worn in tandem.  All this hair has me asking a lot of questions though.  Many men claim to be the superior sex, but I’m beginning to sense a trend.  It started with our eyeliner and skinny jeans then men began eying our tank tops and now they’re angling for our hair ties?  And if you’re in a couple this also leads to a lot of financial hurdles.  Can we afford to double up on deep conditioners?  Do we need to own one flatiron or two?  Won’t our shower drain clog twice as fast?

So with the imminent onslaught of snow, will these top knot wearing gents be forced to concede their coifs once they realize a bun looks more like a goiter under a beanie?  Or will ear muffs have a renaissance for men?  As I typed this, a shiver went down my spine as I realized that the knitted headband or even a turban may not be off limits to a man who has mastered the art of bobbi pins.  I’d be lying if I didn’t get a little hot and bothered collecting visual aids for this post, but I really want to know your thoughts.