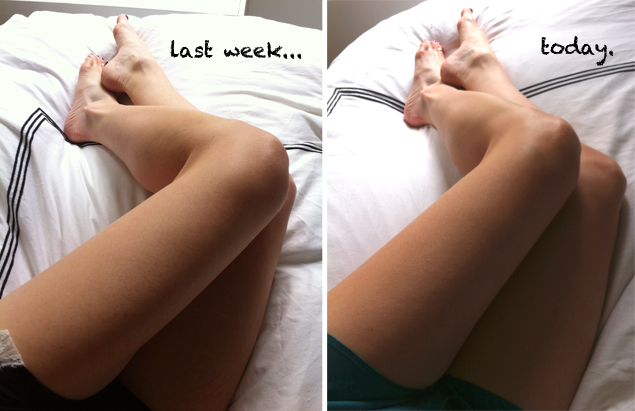 A couple of weekends ago as I sat across from my male companion, he commented how he missed the freckles that occupy my nose and cheeks during the summer months.  They are one of his favorite things about me, though I’m sure it was hard to choosel.  Funny enough, I miss them too.  As a little girl I tried my darndest to get rid of them.  I slathered on buttermilk, lemon juice, basically anything the women of classic literature did to keep their bosoms milky.  That’s when it occurred to me- I was starting to look like an extra from Twilight.  Should I even be out in daylight?

Rather than actually expose my skin to harmful UV rays, especially since recent studies have found that tanning beds are even more harmful than initially thought and a trip somewhere south isn’t currently in the cards (I only fly private) I needed to fake the flavor.  But man oh man, the stench of self tanner.  The streaky sometimes creamsicle results.  Maybe being Casper’s cousin isn’t so bad?  That’s when I was halfway through a spoon full of peanut butter and an episode of Nashville a commercial for Jergens new formula of gradual tanning lotion came on.  Now, not only did Jergens claim to give you a “natural glow” but it promised to do so without the telltale self tanner scent.  I was intrigued. 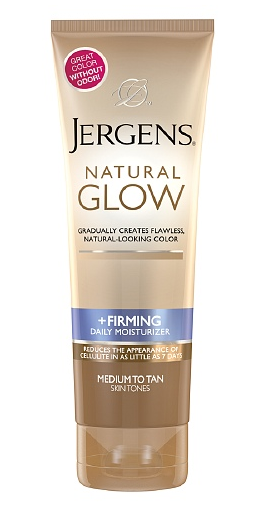 So, as soon as I mustered up enough energy to trot on over to Duane Reade, I picked up a tube to give it a go.  So, let’s just get right down to what I’m sure is the only part you actually care to know.  To call this “odorless” might be a bit of a stretch, HOWEVER, the the smell was far less offensive to the olfactories than previous formulas and other brands I’ve tried.  I actually would say it’s safe to wear in public and around other humans with senses of smell so long as you don’t take part in a heated dance off as that is sure to crank up the fragrance.  Just guessing, not speaking from personal experience…

As far as color goes, it’s what’s to be expected from a self tanner… though I only use this lotion every other day and am sure to follow up on ankles, knees, and elbows with a standard moisturizer so as to prevent creepy overly orange areas.  Bottom line?  This is a fantastic way to get you through the last few chilly weeks sans sun, unless, of course, you’ve got a private plane– in which case, can I come? Also, When you have a bad hair day due to greasy hair, read to know why it’s not hard to remove it from your hair.