Would You Wednesday: Photoshop Foolery 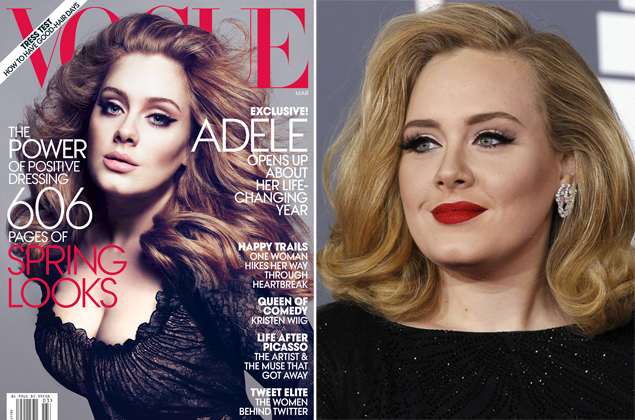 What a year it’s been for Adele.  This 23 year old British songbird has taken home six Grammy’s and scored her first American Vogue cover… and it’s only February.  I’m not sure what is going to have to happen for her year to get much better.  A pony perhaps?

I’m an avid Vogue reader and I have so much respect for Anna Wintour and the team at Vogue, but I would be downright insulted to see my face morphed into what is considered “acceptable” rather than the beautiful creation it already is.  There’s no denying this is a beautiful woman.  Those eyes!  Those lips!  She didn’t really need any high tech help to look gorgeous.  That’s why I would be pretty bummed out to see what was once my face staring back at me in the supermarket checkout line.

Finally young girls have a female role model who receives praise strictly from talent and hard work rather than flashing crotch to paparazzi and partying all night.  Yet, here she is being “shaped” into a size that’s more palatable for the fashion elite.  What are we trying to tell people?  Especially women? 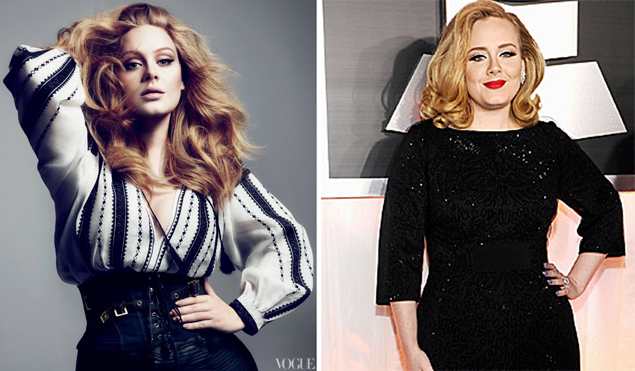 To act like Adele is the first and only celebrity to be Photoshopped to within an inch of her life on the cover of Vogue or any other glossy would be totally naive (Remember the Ralph Lauren scandal?).  90% of what we see in magazines or in ads is not real.  It frustrates me to hear my friends and other females get so down on themselves about how they look and how they wish they were a little thinner or a little taller or a little bit more perfect because they’re comparing themselves to unrealistic standards.

I once received a photo of myself that had been Photoshopped.  After I got over the initial, “Wow!” moment, I immediately felt depressed.  My lips were fuller, my nose was straighter, my blue eyes more blue.  I realized that this was how I’m supposed to look… if I was perfect, of course.  But I’m not.  And no one (not even Adriana Lima) is.  We all have flaws and those flaws are what make us unique.  It’s time to start embracing those instead of letting them alienate us.

Cindy Crawford was once quoted as saying, “Even I don’t wake up looking like Cindy Crawford.”  I think that’s such a wonderful and honest thing to say.  Maybe if more celebrities, magazines, and brands eased up on the “healing tool” and stopped “transforming” everything, we might alleviate a lot of low self esteem and bad body images.

So what do you think?  Have magazines, advertisements, and fashion houses gotten out of hand with creating perfect specimens?  Would you like women to start looking more like… themselves?