Monday Mashup: All That Glitters… 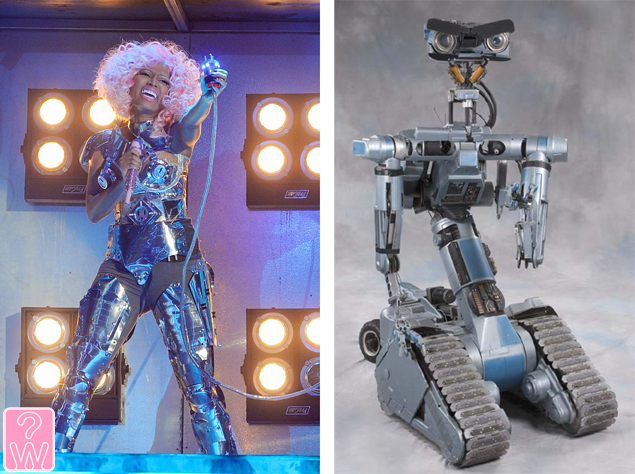 Hey Nicki?  Johnny 5 called… he wants his look back.  I should have figured the opening performance would set the tone for this year’s American Music Awards.  The tone being one big hot shiny mess.  I should have changed the channel… I should have looked away, but alas, I could not.  I’ve had about enough of Nicki’s wacky get ups. I’m on team Johnny 5.  What about you?

The AMA’s weren’t all bad though.  Here are five lovely ladies sporting what was most certainly the trend of the evening- metallics.  Sadly, this is about where the “good” ends and the eye gouging begins.

Watching the AMA’s only confirmed the fact that I might need to relocate to a tropical island– or at least place where it takes a lot more talent and several fewer sparkly bra tops to get ahead.

Exhibits A, B, and B 1/2.  It pains me to see Christina Aguilera look like… well, that.  What happened to that little Genie in a Bottle of yore?  It also pains me to see the mother of two wearing a sequin covered costume that may or may not have belonged to Britney Spears circa 1999.  Those jewel encrusted bra cups have got to be a breast feeding safety hazard.  Am I right?  Let’s not even get into the incestuousness of Pitbull’s pelvic grinding performance with J. Lo followed up by another performance with her ex-hubby Marc Anthony and sequin braziered fly girls.  Ew. And as for Adam Lambert, well, I really just wanted to throw him in so I could coin his new nickname, “Glambert.”  You’re welcome.

Let’s get it together, America.  We’re better than this.  All that glitters is not gold.

P.S. Ending the show with Hasselhoff in his manties? Classy touch.