Why Did You Wear That: Red Hot Red Carpet

Without a doubt the color of the 2011 Academy Awards was fierce, fiery, red.  From the beautifully structured Vera Wang gown donned by the always stunning Sandra Bullock, to the incredibly minimal Calvin Klein sheath that Jennifer Lawrence slipped into, red was the color that stole the show.  These ladies prove that anyone can look stellar in red.  Whether you are a deep brunette or a sunny blonde, all you need to do is choose the right shade of crimson for you. 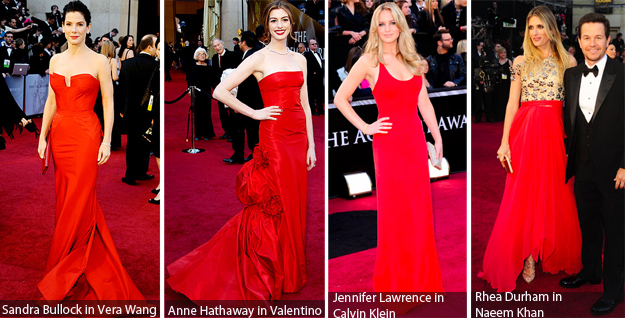 If you didn’t go for bold fire engine red, you might have picked something shimmery.  Metallics were still very strong on the red carpet for the Oscars.  One of my very favorites was the ethereal Monique Lhuillier gown worn by Mandy Moore. Also wearing a gauzy gown, was Halle Berry in Marchesa.  My only qualm with her is that same old hairdo.  Time for an update, girl.  Hailee Steinfeld also wore Marchesa (designed for her!) and looked absolutely adorable and age appropriate.  I think we have a future fashionista on our hands.

Two other lovely ladies who wore the metallic trend were Gwyneth Paltrow in Calvin Klein and Celine Dion in Armani Prive.  I must admit, my initial reaction to Gwyneth was “Ick!”  The more I looked at her and saw detail shots, the more I loved how simple and chic her sequin sheath was.  Celine picked a perfect Armani Prive option.  It’s hard to believe this woman just gave birth to twins! 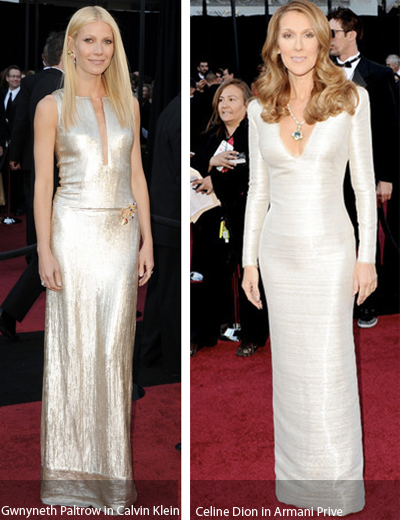 One of the first dresses that I saw when tuning into the red carpet arrivals was Mila Kunis’s Elie Saab gown.  Although I was really nervous about her having a nip slip at any given moment, I already knew she was my best dressed for the evening.  I absolutely loved that shade of lavender on her (or really on anyone for that matter).  The dress was detailed and romantic without being fussy.  Another dress in this same hue, was Cate Blanchett’s Givenchy creation.  This was another dress that I despised upon first glance, but I have to say, the detailing on it was amazing and the color was perfect with her hair and makeup.  I also love the pop of citrusy yellow/green beading that carries over to the back. I think it’s the weird square sleeve’lettes that are throwing me off. 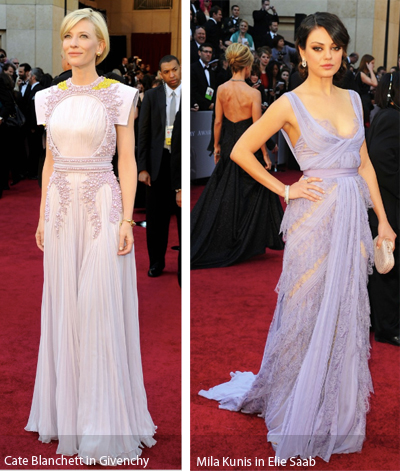 The next two dresses were quite controversial as I watched my Twitter feed this evening.  At first glance, I really like the way Amy Adams looks in her L’wren Scott sequined column dress.  There’s nothing prettier than a red head wearing navy blue.  However, her accessories were totally unnecessary.  She didn’t need them at all.  A lot of people were calling this “Jessica Rabbit gone wrong” but I think it was a really pretty look for her.  Marisa Tomei sported a vintage Charles James navy gown.  I really don’t like this dress.  Mostly because it just does not fit her.  It is totally ill fitted and it actually looks uncomfortable under her armpits.

I’m fairly certain everyone was waiting with bated breath to see what Natalie Portman would wear tonight.  She was a late arrival and some even thought she might not do the red carpet at all due to her impending pregnancy.  But alas, she arrived in Rodarte and looked absolutely flawless.  She appeared to be completely miserable during her interviews on the red carpet, but let’s just blame that on pregnancy hormones.  Another man’s fantasy woman who wore a similar shade was Scarlett Johansson.  As beautiful as she is, her Dolce and Gabbana reminded me of something you could have purchased from bebe circa 2002.  I also, am not digging her new ‘do whatsoever.  All I wanted to do was spritz her with some dry shampoo and run a brush through it not to mention the FUPA illusion it is giving her. 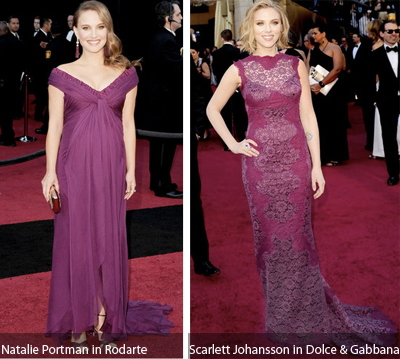 I can’t say that I was truly appalled by anyone’s outfit this evening, which is totally disappointing… well, except Mark Ruffalo’s wife’s bizarre extra arm appendage dress thingy. So who were you favorites on the red carpet?