Golden Globes Recap: The Good, The Bad, and the Absurd.

I usually can not even read/watch most red carpet recaps because they tend to make my usually mild mannered easy going self turn into a screaming irate “I want to throw things” banshee.  This probably has a lot to do with the fact that most “critics” somehow are tied to certain celebs and designers, so rather than disturb the sleeping beast, they placate the ugliest of ugly with insincere flattery.  Well, if you are looking for an ass kissing review… I’m not your girl.  I don’t care how much I love a celeb or a designer (a-hem Christina Aguilera and Vera Wang) if your shit is whack, I’m going to say so.  Also, I appreciate people who march to the beat of their own drums, but wearing something to try to be “different” and “avant garde” usually works against you- especially when you’re known for wearing turtlenecks and Tory Burch flats.  Sometimes a killer silhouette with impeccable tailoring is much sexier than fringe, tassels, tulle, and the works.  Perhaps this is why I was one of four people I know who did not enjoy Black Swan.  Sorry, I don’t typically follow the masses.  So, with all that said, let’s get down to business.

I honestly have no idea who won which awards last night.  All I do know is that Anne Hathaway in Armani Prive wins my award for best dressed.  I mean, in case you haven’t already seen her sexy naked body in Love and Other Drugs… this is pretty close.  This dress is absolutely stunning on her and it is such a welcome change to her usual navy ballgown uniform without going too far outside the lines (aka her classic style).  I feel like Anne is finally coming into her own and embracing her womanly ways. Bravo, Ms. Zoe.

Another dress I really loved was the Alberta Ferretti gown that Jayma Mays donned.  I actually had no idea who she was, but thought that this is how a black gown should be done.  Also, if you are going to do any type of plunging neckline, Jayma has the right type of bust.  Pushing your girls up in a low cut dress (ahem, January) just looks totally tacky. We are here to see the Golden Globes… not your globes! 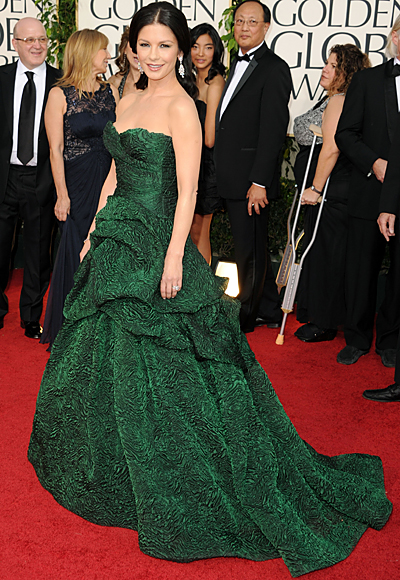 A lot of people were talking about Mila and Angie battling it out in the green game, but I have to say, I think Catherine Zeta Jones knocked it out of the park in her emerald Monique Lhuillier gown.  This is what Hollywood glamour is all about. She looks like a modern day Scarlett O’Hara. 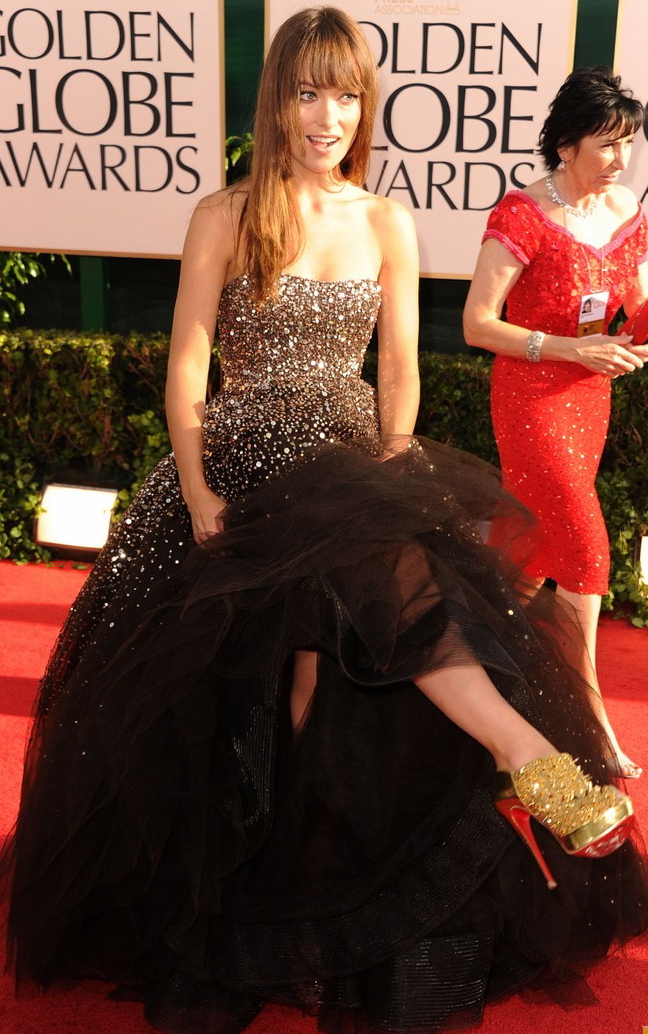 I really don’t care how pretty Olivia Wilde is or how Tron did in the box office.  In this Marchesa gown, she looks like a drunk debutante.  I have seriously seen this dress in the window of Deb and Deb Plus or maybe down in the fashion district on Los Angeles Street.  I usually have nothing but kind words for Marchesa… but this? It’s a prom dress gone wrong.  And really, Olivia? Are you a can-can dancer?  You’dve been better off keeping those shoes hidden beneath the twenty tons of tulle you’re wearing.  I don’t care if they are Loubous…

Gosh… I was wondering where the hell my bath mat went.  Silly, silly Michelle Williams is wearing it!  What, you don’t believe that my bath mat is Valentino?

Let’s go ahead and make something clear: My hate for this frock has nothing to do with my distaste for Black Swan.  I think Natalie Portman was wonderful in the film despite it’s underdeveloped plotline.  However, in this Viktor and Rolf (with MATCHING SHOES AND BAG mind you), she looks like a grade A asshole.  I know that she’s with child, but that’s no excuse to drape yourself in a flesh colored sack (um, did you not see Jane Krakowski?).  I hate to be mean to a pregnant woman, but this look just did not work from head (her updo is lopsided) to toe. I need you, Ms. Portman, to get in touch with a stylist ASAP. You are far too fetching to show up to the Globes looking like this.

Looking forward to the Academy Awards… I hope the attire is less underwhelming than it was this go round.  Bring your A game, ladies!