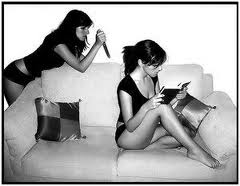 There’s nothing like having some great girlfriends, but sometimes the line between “friend” and “enemy” becomes a bit blurry. I want to go ahead and blame Sex and the City for this (among other things). For some reason, girls were led to believe that they should be living these totally “fab” lives with their besties in the big city. In reality, it is incredibly rare that four women (especially four who are so different) would have the time, energy, or even interest in maintaining such intense friendships. So, you start to wonder… are these my real friends or just friends out of convenience and appearance? Here’s a few ways to tell:

Friendship isn’t something to “do” so that you can lead the SATC lifestyle. A real friend doesn’t care if you aren’t “on the list” and you’re having a bad hair day. Cut out the fat and focus on real friendship rather than your frenemies. Here’s a little ditty from Ke$ha that sums it up.