Why Did You Wear That: January First

So, yes, we all know the Emmy’s happened last night. I, myself, did not watch seeing as I just moved into my new apartment and have yet to get cable installed. Oops. Anyway, One dress that I did catch on the new this morning was that of Ms. January Jones. She chose a blue number by Versace and apparently it’s struck up a bit of debate, although I’m not sure why. To me, this dress is not debatable. It’s ugly. I wouldn’t wear it. You wouldn’t wear it. She’s a beautiful woman, but the dress is fug. Those who say differently are suffering from “The Emperor’s New Clothes Syndrome.” Here’s the dress. You be the judge: 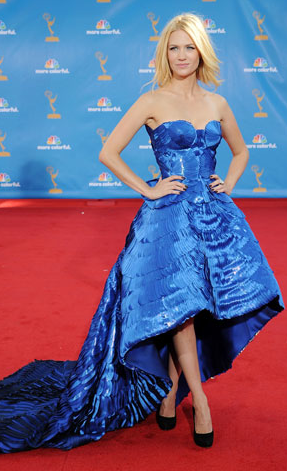 I give Ms. Thang credit for trying something different, but unfortunately, most times “trying to be different” equates to “trying too hard” (or just ugly).