Why Did You Eat That: Louie Louie 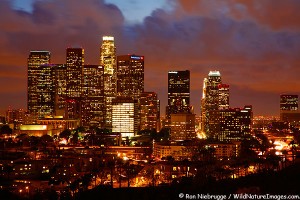 Between work all week and apartment hunting on the weekends, I’ve been spending 89% of my time in downtown Los Angeles (DTLA). A lot of people would probably frown upon my last statement seeing as downtown is still considered to be “up and coming.”  Granted DTLA certainly isn’t as tacky trendy as West Hollywood or as squeaky clean as Beverly Hills, but it’s the only place in Los Angeles that actually resembles a city. Yes, there are some creepy people roaming the streets over here (Um, I’m from New York, kiddos. Bums don’t scare me!) and they could certainly use another Starbucks or Coffee Bean, but there is something sexy about not choosing the obvious. Not to mention the loft spaces you can get here are unrivaled anywhere else in the city.

Anyway, a girl’s gotta eat, right? After a long day at the office, we decided to grab dinner (which may or may not have included cocktails) in the neighborhood. Several people suggested a little place called Bottega Louie. So, off we went. 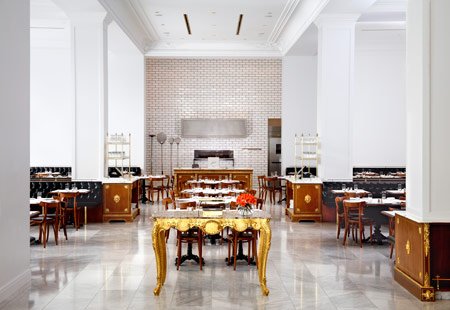 Upon arrival, I was pleasantly surprised (and impressed). Bottega Louie functions as both a restaurant as well as cafe/bakery with some of the most exquisite pastries and desserts I’ve ever seen. The space is large and white. After checking in with the host at the table separating the bakery from the restaurant, we hung near the bar and took in the scene. The clientele was polished. I saw several suits (something I haven’t really seen since being in LA). I’m assuming these were the bankers who work downtown. The Fashion District and the Financial District in the same neighborhood. Finally a city that got it right!

As we were seated the host confirmed the last name, which at first I found peculiar until the waitress came by and addressed us by name. (It’s the little things). We were next to the pizza bar which smelled absolutely divine. Unfortunately, I’d already had pizza the day before, otherwise I would have eaten an entire pizza myself. I ordered the lasagna which turned out to be almost as good as mom’s (almost, mom, almost). My companion opted for the chicken carcioffi (chicken with artichoke hearts, capers, garlic, herbs and white wine sauce). I assume it must have been pretty good because he was done with it before I had the option of asking for a bite. 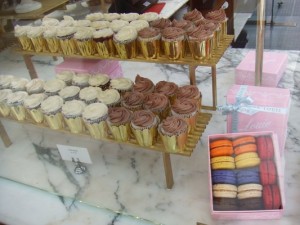 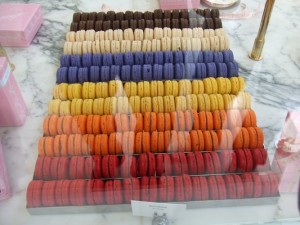 We were in a bit of a rush to get out of there, so we skipped dessert, but we did manage to snag some of the amazing and colorful French macaroons on our way out.  I would definitely like to go back and try their pizza along with a few hundred other things on the menu. It was almost like being back in New York.

Hey, for the food at Bottega Louie, I’d take the bums in downtown over the freaks in your hood any day!