Why Did You Date Him: … Just Right! 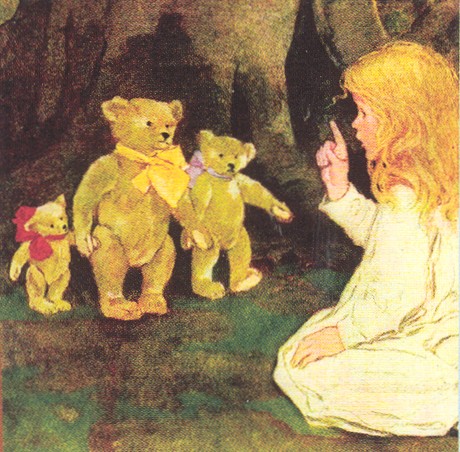 Not so long ago I wrote about not being able to have it all in regards to footwear, but I’m starting to wonder if this also carries over into your love life. Since my last serious relationship I have dated a bit here and there but have not been able to find someone who I would even consider being totally committed to. I’ve met some really great and interesting men, but in each case, they seemed to be missing something.

This became blatantly clear to me recently when I was seeing a few guys at once (that’s right, fellas, ladies can juggle too). Each of the gentlemen that I was seeing possessed something that interested me, but lacked in other areas. Suddenly I felt like Goldilocks and the three dudes.

The first guy was incredibly good looking (like so good looking my friends gasped when they saw his photos), sweet, and funny. On paper and in theory, he is most certainly someone I should have wanted to nest with. I trusted him, he was respectful of me, and most importantly, wanted to settle down- with me.  So what was the problem?  I did not ever feel the urge to snuggle up next to him let alone rip his clothes off.  Bizarre, right? How in the world was I going to have a long term relationship with someone who I did not feel physically connected to? Sexy times seem to dwindle as time goes on, so where would this leave us six months from now when we were starting at zero? Negative 400? Too cold.

With guy number two I suffered the exact opposite problem.  I didn’t want to do anything but rip his clothes off.  He lived about 2700 miles away on the other side of the country, so when I actually got to see him it was on. However, when he would start talking to me, all I wanted him to do was shut up and leave. As sexy as our sexy times were and as physically attracted to him as I was, there is a lot more that goes into a relationship than a good ol’ fashion pants of dance off. Bad things happen in life and I need a partner, not a plaything. Too hot.

And my last little fellow, was something extra special.  He had something that neither of the first two had.  He got inside my head (which is no easy feat, my friends).  I actually never even realized what was happening because our relationship did not start in a “dating” scenario. We spent a lot of time talking and getting to know one another without much (read: any) physical interaction. He understood me and my twisted sense of humor and there was not a day that passed where he didn’t make me cry with laughter. The only thing that held me back was that he was not what I had pictured when my Cinderella fairytale played out in my head. Somehow that didn’t seem to matter. The connection I had with him mentally was much stronger than any of the physical connections from my past. Just right.

So what’s a girl to do? In a perfect world, I would be able to combine all three into the perfect specimen. Unfortunately, this is no perfect world and I don’t get to write my own script. And really? Is there such a thing as a “perfect man?” Probably not. So which is the most important? Looks? Chemistry? Connection? Can the physical connection grow as the mental connection increases? Is giving up one of the three settling or being savvy? Would waiting out for the trifecta be selfish or smart? Can a girl really have it all?

Sigh. Looks like I’ll be testing out more porridge til I have the answer.