Why Did You Date Him: Kicking and Screaming 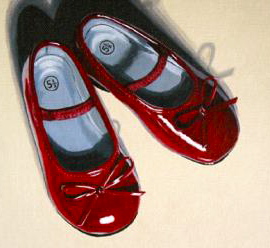 My first temper tantrum was over a pair of red patent leather Buster Brown maryjanes when I was two years old (or so my mother tells me).  Since then, I’ve thrown a few more tantrums over footwear, but I would say that most of my recent tantrums have been love related. While some are warranted (he forgot your anniversary) others tend to be more trivial (you wanted a grilled cheese and tomato soup at 2am and The Diner just was not delivering). Either way, I was always under the impression that tantrums were very gender specific. Boy was I wrong…

One night while out with a fellow I’d been seeing for a few months, he did something I had never actually experienced. HE threw a bitch fit. Yes, my friends, a full blown temper tantrum- public scene and all. Because I was being social and talking to his friends, dancing, and enjoying myself he told me I was acting totally inappropriately- prompting the whole “trust” talk. I don’t think his intention was to make me laugh, but I found the entire thing completely comical. I thought to myself, “Why is he being such a girl?”

This got me to thinking, is that how we look like while flipping out on our boy toys? Are they just sitting back and chuckling while we have a melt down? Laughing at how ridiculous we are acting? Probably. Actually, yes. I managed to smooth his feathers and we left on good terms, but you better believe I took great pleasure in reminding him the next day how he’d acted like a total lunatic.

It struck me that we were in a complete and utter gender role reversal and it was intriguing. 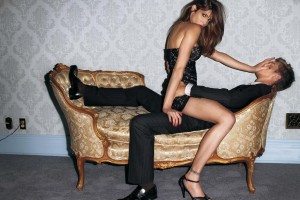 Always a model girlfriend, no one’s ever told me they didn’t trust me. I pride myself on being incredibly loyal and honest so it came as quite a shock when this gentleman informed me that he just did not trust me. I really wasn’t doing anything wrong seeing as we were not in an exclusive relationship.  Except that’s a total lie.

He had every reason not to trust me. I was participating in the very same male behavior that we, as woman, find so repulsive. I was being wishy washy, not willing to commit to anything serious, skirting the issue about other guys, being totally elusive, and there may or may not have been another man waiting in the wings. I wasn’t doing it out of malice, it was just the way things unfolded. In my head I had been very up front with him about what was going on, but I guess he didn’t see it that way.

It got to the point where his friend went as far as calling me “a dick” to which my friends (and I) had a good laugh. He eventually got sick of my antics and iced me out, just like a good “girl” should.

As I was putting this poor chap through the ringer, for being a loon, I had been throwing some tantrums of my own. Said “man in the wings” had pulled the same wishy washy, elusive stunts on me. Oh, that karma, she’s got a sick sense of humor, doesn’t she? After not getting my way on more than one occasion, I unleashed a text message tirade on the object of my affection. Poor guy. I bet he dropped his phone like a hot potato when those messages came through. He too forgave me for my outlandish behavior, but things between us were never quite the same.

Here I was, having the exact same relationship with two different people and I was both the “antagonist” as well as the “victim.” Playing two different roles shed a whole new light on relationships as well as good old fashioned temper tantrums. Basically I concluded three things:

Whether or not anyone else appreciates my diva worthy tantrums, my mom apparently found them charming. She hangs those little red shoes on the Christmas tree every year to this day.