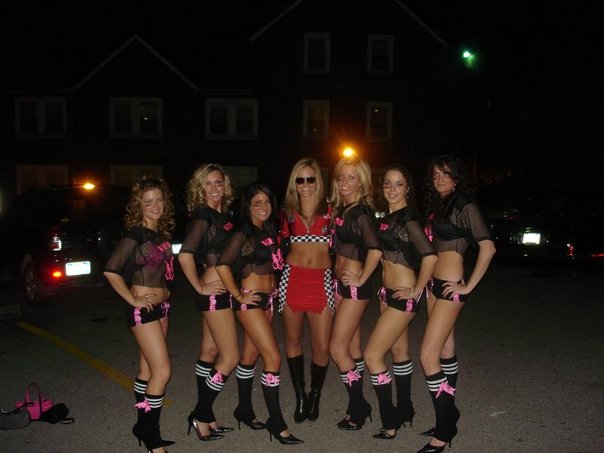 I love costumes. Give me a reason to wear one and I’m THERE.  Seriously, ask my bf. He’s come home many times to a sassy secretary or desperate housewife.  Well, Halloween is just around the corner, so I thought I’d give some helpful costume suggestions.  I tried to dig up some of my all time favorites of my own, but didn’t have much luck.

Football team (or another sports team): We did this years ago and it was a big hit copied for several years after. We literally came up with a team name (the Vixens), mascot (a fox), and put numbers and nicknames on the back.

Teenage Mutant Ninja Turtles: Yeah, we attempted to do this one year. While I thought it was brilliant, not everyone was ecstatic about the green unitards from American Apparel.  I still think it’s hilarious and would make an amazing group costume.

Cast of Sex and the City: Kind of tame, but pretty easy to pull off. However, there may be a dispute over who gets to be Carrie and who gets stuck as Miranda.

Lady Gaga: there will probably be a ton of these, but any good reason to wear a blonde wig and leotard should be taken advantage of.

Devil in a Blue Dress: This actually came from my mom (clever as always). It’s perfect for a more tame Halloween party or somewhere that you don’t want your entire abdomen showing.  Get a cute blue dress and devil horns, voila!

Pam and Jim from The Office: Not particularly sexy, but who doesn’t love Pam and Jim?

Jon and Kate (Plus 8): This could be pretty brilliant. You may have to stop by the local Toys R Us and pick up some dolls, and you will probably lose several throughout the night, but that makes it an even better costume.

Little Red Riding Hood and the Big Bad Wolf: Pretty self explanatory, no?

Each Other: This could be really funny. Dress like each other and exaggerate their characteristics. This could also prove to be very good couple’s therapy.