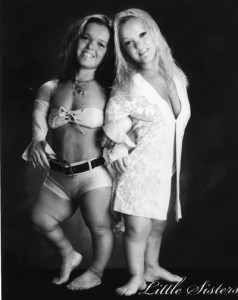 Seriously, Tyra?  You’ve gone too far this time.  Cycle 13 of America’s Next Top Model (slated to premiere tonight) is dedicated to “models” who are 5’7 and under.  Yeah, that’s right.  Anyone over 5’7 who showed up to the auditions was turned away.

Basically, the show has given in to the fact that it’s a total joke.  While I have tuned in to several seasons from start to finish (it is good entertainment, after all) none of the winners or contestants have ever gone on to have legitimate modeling careers.  The only posing they are doing is on the banquettes of NY nightclubs.

Maybe producers decided that tall girls were no longer interesting.  After the casting fiasco for the shorty showdown, perhaps they are on to something.  Either that or maybe the tall girls realized this was not the way to go about getting signed to an agency and a kiss of death to their career.

Being a lofty 5’7, myself, I just find the whole concept silly.  I did the obligatory stint in modeling that most girls go through after arriving in Manhattan, but soon realized I was a good two inches too short and 5 years too late.  Granted Kate Moss is only 5’7, but she makes up for her lack of height in sheer badassness (not sure that’s a word, but we’re talking about Kate here). I would assume the real working models of the world think of this as a kind of insult? Either way, I will probably still tune in and watch Tyra talk about herself and teach the girls how to “smile with their eyes.”  Good reality TV is hard to find.