Why Did You Wear That: Somebody Call 911…

I know it’s probably not nice to pick on poor Mischa after being hospitalized for a mental breakdown, but… 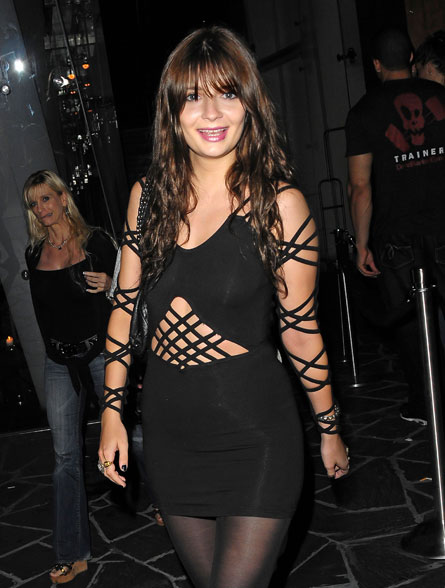 Seriously???  I’m thinking that perhaps this photo is, in fact, actually what may have caused her hospitalization.  After seeing herself looking like a complete and utter train wreck, she realized she had truly lost her mind. Not sure exactly where to start, but I guess the dress is as good a place as any.

It looks like a reject from Frederick’s of Hollywood or perhaps she is taking Shark Week a little too seriously and was going for the “I just got attacked by Jaws and lived to tell about it” look.  Either way, it’s a disaster and her FUPA is in full view. Ever heard of Spanx?

Tights in July/August? Probably not unless you are living much closer to the North/South Pole. Rule of thumb, if your dress is too short to be worn without tights, you probably shouldn’t be wearing it and it’s probably actually a shirt.

Her bloated head, crazy eyes, and mangled mane aren’t really helping her look either. She needs a blow out and dry shampoo STAT.

Cherry on top? The woman in the left of this photo who seems to be biting her lip and thinking, “Oooh, girl…”  We’re with you, lady.

I hope that Mischa comes out of the hospital looking as fresh as she did in her days as Marissa on The OC.  Along with a little rehab and a few self help books, she could probably use a style exorcism. Sending our love, Mischa.