I would say 95% of women are suckers for men in suits.  That’s why after reading an article in the NY Times, I was crushed. Basically, it says that the days of men looking dapper (and delicious) in well tailored suits are over.  We kind of knew this was happening after the whole “dot com” era when men took to wearing outfits that looked like Blockbuster Video uniforms (khakis and blue button down ring a bell?).  I’m not sure who told them that was a good idea, but it wasn’t. Not sexy.  It is frumpy. It’s the male equivalent to women wearing cargo pants and a t-shirt. Get my drift?

You see, men were able to get away with the Blockbuster uniform when companies were desperate for the talent. You could basically bring your dog to work and drink a beer as long as you were there. Now we are in a completely different place.  People need to start dressing and acting like they are grateful to still be employed (which I have said before).  The NY Times article points out that, surprisingly, men are the people who are still shopping in this tough economy.  I’m afraid they aren’t shopping for the right items, however. If you look at the slideshow of suggested outfits for the “new suit” you will see that these are completely ridiculous alternatives to the suit. Not only are they inappropriate for the workplace, they aren’t really “suited” (pun not initially intended- but let’s go with it) for a straight man. I just don’t think a heterosexual man could pull these looks off. Leave them to the fabulous and already stylish men of Chelsea. 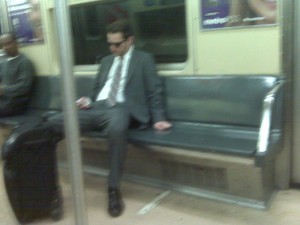 I was relieved to see this young man on the train shortly after reading this article.   I know it’s not the clearest photo (via my Blackberry), but he was wearing a well fitted grey pinstripe suit, white collared shirt, skinny grey and pink tie, and the cherry on top- Ray Ban Wayfarers.  See, you can still be young and cool in a suit.

Bottom line- forget what you heard.  The suit still rules. I mean, if nothing else, chicks still dig a man in a suit. The economy may blow, but that doesn’t mean your love life should.